BBC says British soldiers are on the ground in Syria 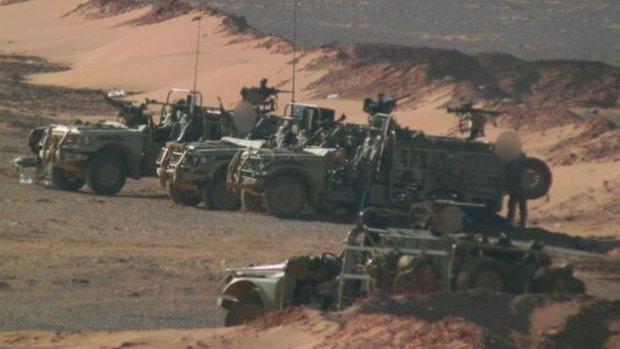 The BBC has obtained exclusive pictures showing for the first time British special forces operating on the ground in Syria.

It is the vehicles that first stand out. The open air, Thalab long range patrol vehicles are built for harsh terrain and are favoured by special forces.

In this case it is British special forces, seen for the first time on the ground, inside Syria, in photographs obtained by the BBC.

The pictures, which date from June, follow an attack by the so-called Islamic State (IS) on the moderate rebel New Syrian Army base of Al Tanaf on the Syria-Iraq border. The British soldiers appear to be securing the base’s perimeter.

According to eyewitnesses, they were there in a defensive role. But they are carrying an arsenal of equipment including sniper rifles, heavy machine guns and anti-tank missiles.

If IS attacked again they would have been able to put up a considerable fight.

A New Syrian Army’s spokesman refused to comment on the pictures of the special forces, but acknowledged their help.

He said: “We are receiving special forces training from our British and American partners. We’re also getting weapons and equipment from the Pentagon as well as complete air support.”

For: BBC says British soldiers are on the ground in Syria