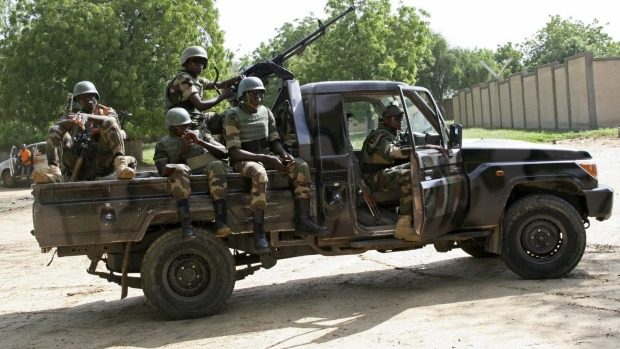 An attack by members of the Boko Haram sect in Southeastern Niger has killed thirty soldiers from Niger and two from Nigeria, the Niger defence ministry said on Saturday.

The incident took place on Friday in the southeastern town of Bosso close to the border with Nigeria. The ministry said the soldiers were attacked by “hundreds of assailants”.

“The counter-offensive conducted early this morning helped to retake control of all the positions in the city of Bosso. The situation is under control”, the ministry added. “A sweep is ongoing in the area with the mobilisation of all land and air means”.

Seven others from Niger and eight from Nigeria were injured in the attack, according to the ministry, which reported “several deaths” among the assailants.

Bosso is part of the Diffa region, which is home to many refugees and internally displaced people who have sought to avoid Boko Haram violence elsewhere. The region has been targeted numerous times in attacks blamed on the militants.

Six people were killed last month in the village of Yebi, 4 km (2.5 miles) from Bosso, in an attack thought to have been carried out by Boko Haram. The group, which began in northeastern Nigeria, wants to create an emirate and impose a strict interpretation of Islamic law.

Last month, the authorities of Niger say they were preparing to carry out an attack against Islamist group Boko Haram. Since February last year, Boko Haram fighters have carried out more than 100 cross-border raids into southern Niger.

Niger has been working alongside other countries in the region, including Chad, Cameroon and Nigeria, to put together a joint strategy to end the threat posed by Boko Haram.

Niger’s President, Mahamadou Issouou said its government has arrested scores of Boko Haram militants and would ensure they are been handed over to the International Criminal Court (ICC) for trial.

Boko Haram has been waging a six-year insurrection to establish an Islamist state in the northeast of Nigeria.The group has killed thousands and displaced 2.1 million people, most of whom are children.

In April 2014, the group gained worldwide notoriety when it kidnapped more than 270 schoolgirls from the town of Chibok in northern Nigeria’s Borno state.

The militant group controlled vast swathes of territory across three states in northeastern Nigeria at the beginning of 2015 but was pushed out by Nigerian troops with the help of Chad, Niger and Cameroon.

Following a heavy loss due to the renewed efforts by the Military, Boko Haram factions have reverted to guerrilla tactics, raiding villages for supplies and bombing soft targets like places of worships, markets and bus stations.

Tunisian police use water cannon against crowd protesting against the president

For: Boko Haram killed 32 soldiers in border city between Niger and Nigeria