Bomb attack in Turkey kills police, in a yet another explosion

Seven police officers have been killed in a bomb blast that rocked the Kurdish-dominated south-eastern Turkish city of Diyarbakir.

Explosives packed into a car went off near a bus station as a police minibus drove by. More than 20 people were injured in the attack.

The army is locked in an operation against rebels from the Kurdistan Workers Party (PKK) in the region.

A ceasefire between the government and the PKK collapsed in July last year.

Since then violence has surged, with militants attacking security forces and the army besieging Kurdish-dominated towns.

The explosion was powerful enough to shatter glass in nearby buildings. Both civilians and police were among the wounded.

“The terrorist organisation shows its heinous face through this attack,” said Mr Erdogan, who is visiting Washington.

“We cannot tolerate this any more. European countries and other countries, I hope they will see the true face of the PKK and other terrorist organisations in these attacks.”

No group has yet said it was behind the blast.

The attack comes a day before a planned visit to Diyarbakir by Turkish Prime Minister Ahmet Davutoglu.

The TAK, an offshoot of the PKK, has claimed two bombings in Ankara this year that killed more than 60 people.

Turkey is also part of the coalition battling so-called Islamic State (IS) and has also been attacked by the militant group.

In Syria, the US has been supporting the YPG, a Kurdish militia Turkey regards as an offshoot of the PKK, in their battle against IS. 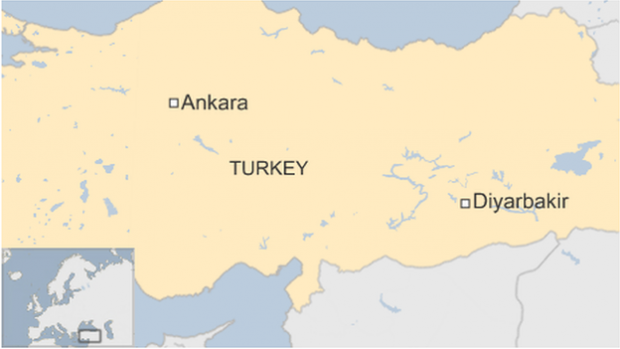 For: Bomb attack in Turkey kills police, in a yet another explosion