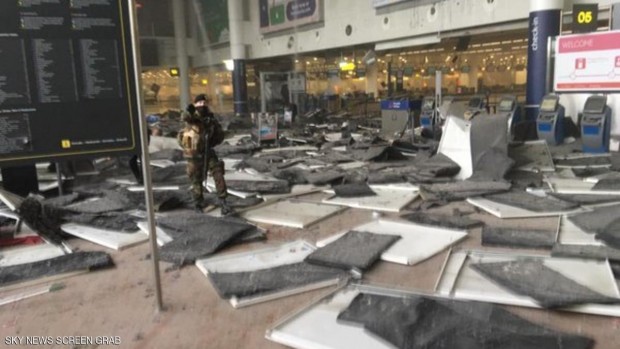 An hour later, an explosion hit Maalbeek metro station, close to the EU institutions. The airport and whole metro system have been closed.

The attacks come four days after Salah Abdeslam, the main suspect in the Paris attacks, was captured in Brussels.

The Belgian government has confirmed casualties at the airport but has given no numbers. The cause of the explosions is unknown.

Belgium has now raised its terror threat to its highest level.

Belgian broadcaster VRT said that in addition to the dead at the airport, at least 35 people were severely injured.

The Belga news agency reports that shots were fired and shouts in Arabic were heard before the two explosions. Some reports say it was a suicide attack.

Rail transport to the airport has been halted and people have been told not to come. All flights have been diverted.

Security has been stepped up at Gatwick and Heathrow airports and the UK Foreign Office has advised British nationals to avoid crowded areas in Belgium. UK PM David Cameron will chair a meeting of the Cobra response committee later on Tuesday morning. 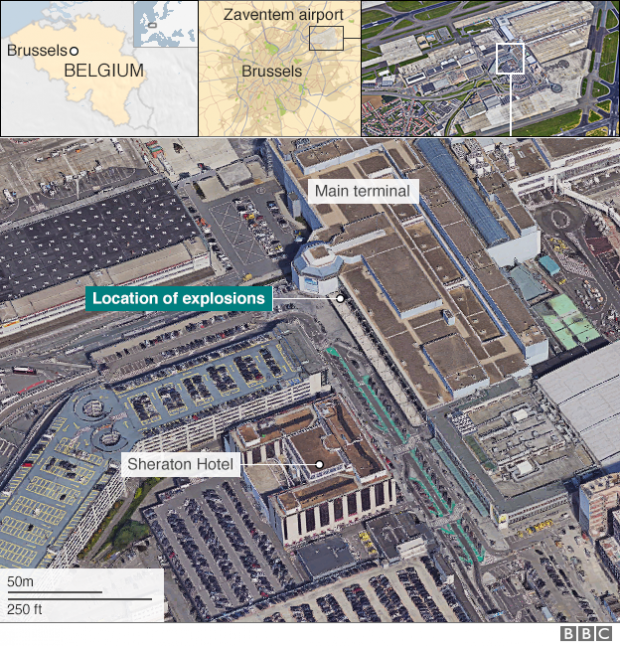 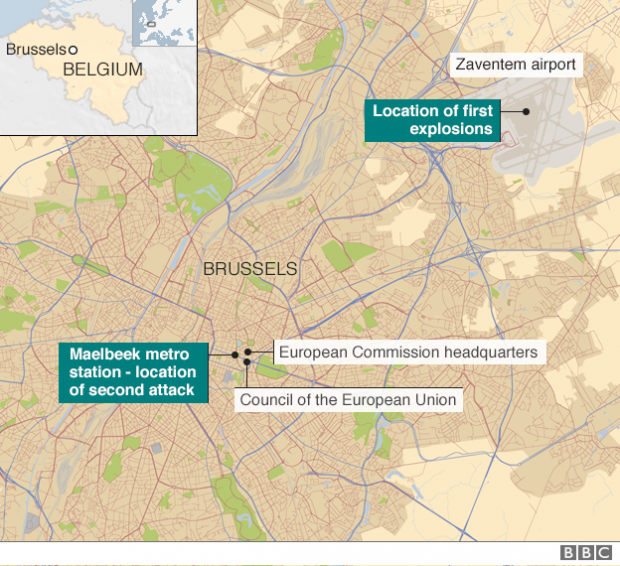 Some reports say at least one of the explosions at Zaventem was close to the American Airlines check-in area but this has not been confirmed.

Owen Li, a financial services worker from London, told the BBC he was in the affected check-in area 30 minutes before the explosions.

“I was eating my breakfast and then suddenly everyone was running towards us. People didn’t know what to do. They thought it was just an exercise. Some still stayed at the restaurant but slowly people realised it was real.”

There are few details yet about the metro blast, but there are some reports of casualties.

It occurred shortly after 08:00 GMT during the rush hour at Maalbeek station, with TV images showing smoke billowing from the entrance.

The European Commission, the EU’s executive arm, has told employees to stay indoors or at home. All meetings at EU institutions have been cancelled.

Belgium’s Interior Minister Jan Jambon had said on Monday that the country was on the highest level of alert for possible revenge attacks after the capture of Salah Abdeslam.

He told Belgian radio: “We know that stopping one cell can… push others into action. We are aware of it in this case.”