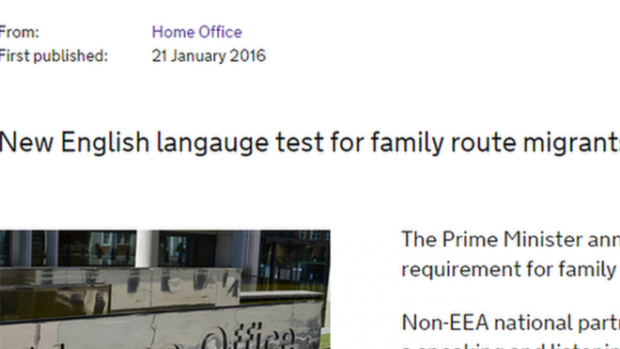 Red-faced officials at the Home Office have been forced to correct a spelling error in a press release about new English language tests for migrants.

Language was spelled “langauge” in the original release, put out on Thursday.

But it was corrected by officials after Twitter users ridiculed the error.

BBC Radio 4 presenter Anita Anand said it was “beyond parody” that the Home Office could not spell language in a note to migrants who have been told to learn English.

A Home Office spokesman said: “This was a regrettable typographical error that has now been corrected.”

On Monday, Prime Minister David Cameron announced a £20m fund to teach Muslim women in the UK to speak English, claiming it would help tackle segregation and help them resist the lure of extremism.

But some Muslims have accused him of wrongly conflating the two issues.

Mr Cameron said all those who entered the UK on the five-year spousal settlement programme – not just Muslim women – would have to sit language tests after two and a half years.

Thursday’s press release said the new requirement would not be implemented before October 2016, with the precise timing and further details to be confirmed by the Home Office “in the next few weeks”.