Cameron Defends bombing Libya back in 2011 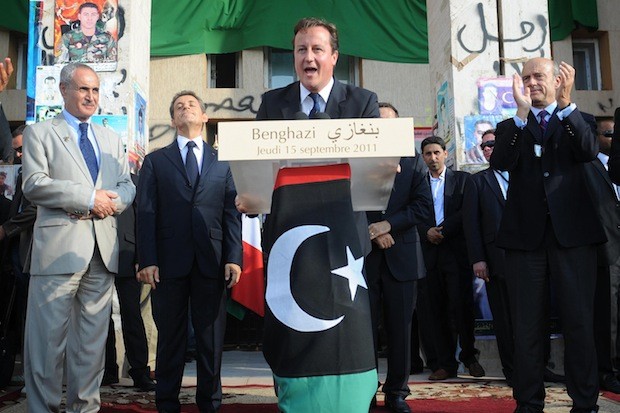 Libya has been in the news again over Christmas: the UN Security Council has endorsed a new government but as Peter Oborne found out when he visited Benghazi, the city that David Cameron addressed after his 2011 bombing campaign (video above), there isn’t much government to speak of. The World Food Programme says that 2.4m Libyans will need humanitarian assistance; the country’s population is 6.2m. Its economy shrank by 25pc last year alone and private enterprise is collapsing: the state now employs 80pc of Libyans. At the height of the 2011 uprising there were about 17,000 militiamen: today they number in the hundreds of thousands and they’re tearing Libya apart.

So is it fair to say that Libyans were better off under Gaddafi, and that the decision to depose him can now be seen as a mistake? When James and I interviewed the Prime Minister for the Christmas edition of The Spectator, I asked him about his thoughts. As we consider options for Syria, I thought the full extract was worth running here.

FN: Libya is probably your biggest foreign policy intervention. Isn’t it hard to say, now, that Libya is a better place now than it was before that  intervention?

DC: I would say that Libya is better off without Gaddafi. What we were doing was preventing a mass genocide.  Then, as you say, the coalition helped those on the ground to get rid of the Gaddafi regime and it’s very disappointing that there hasn’t been an effective successor regime. We did a lot to try and help it, I remember taking the Libyan Prime Minister—as then was—to the G8 meeting in Northern Ireland, getting lots of support but the Libyan political leadership up until now—although there have been some good developments overnight—haven’t been able to put together a comprehensive government.

FN: It’s more serious than that. Its economy has fallen by 50 per cent and a third of the people are going to be requiring assistance according to the UN.  Personally, I supported the intervention – but now I’m beginning to agree with the pre-2010 David Cameron who said that we can’t drop democracy from the sky.

FN: And Libya has proved you right, hasn’t it?

DC: The point I was making is this: to build these things takes a lot of time. Of course you had the option, in Libya, of doing what was done in Iraq: piling in with western ground troops to try and stabilise the situation. But I think that would have made it worse.

FN: Worse than now, overrun with militiamen and a humanitarian catastrophe about to unfold?

DC: Well, you have to work with the new government, see if it performs, to get rid of the militias. It takes time.  There just aren’t any easy answers with any of these things. Whether you are looking at Libya or Syria or Iraq or Nigeria or Somalia, you have to try and build governance and government.

FN: Knowing what you know now, would you have gone ahead with the Libyan operation?

DC: Yes because Gaddafi was going to massacre his own people.

FN: I mean moving on from stopping the Benghazi massacre, taking it to the next level.

DC: Well once you stopped that from happening you had a choice of saying okay, we’ve stopped one massacre, let’s look away whilst another massacre takes place. Or to do what we did: ground Gaddafi’s forces by having a no-fly zone while those on the ground dispatched it.

For: Cameron Defends bombing Libya back in 2011