A 17-year-old boy has been charged with four counts of first-degree murder after shootings in Canada’s western Saskatchewan province, police say.

The boy – who cannot be named because of his age – is also charged with seven counts of attempted murder.

Four people were killed and several injured after the shootings at La Loche Community School and another location.

At a news conference on Saturday, Grant St Germaine from the Royal Canadian Mounted Police (RCMP) said the suspect would appear in court next week.

“The days and weeks are going to be difficult as we come to terms with the impact of what has happened in our community,” he said.

“It’s a sad and difficult time and no words will take away the pain and sorrow of what has happened.” 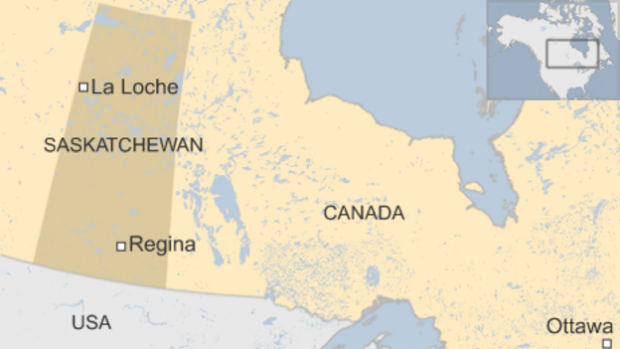 The RCMP said Dayne Fontaine, 17, and his brother Drayden, 13, were shot dead in a house.

The suspect was later disarmed and arrested. The motive behind the shootings is unclear.

Witnesses at the school described screaming and more than half a dozen shots.

“Words cannot express my shock and sorrow at the horrific events today in La Loche,” Brad Wall, the premier of Saskatchewan, said in a statement.

About 900 students attend La Loche Community School for kindergarten through to grade 12 (the last year of high school).

“I ran outside the school,” Noel Desjarlais, a Grade 10 student, told CBC.

“There was lots of screaming, there was about six, seven shots before I got outside. I believe there was more shots by the time I did get out.”

La Loche is a mainly aboriginal community of about 3,000 people.

It is located nearly 900km north-west of the provincial capital, Regina.

For: Canada: A 17-year-old charged of school shooting