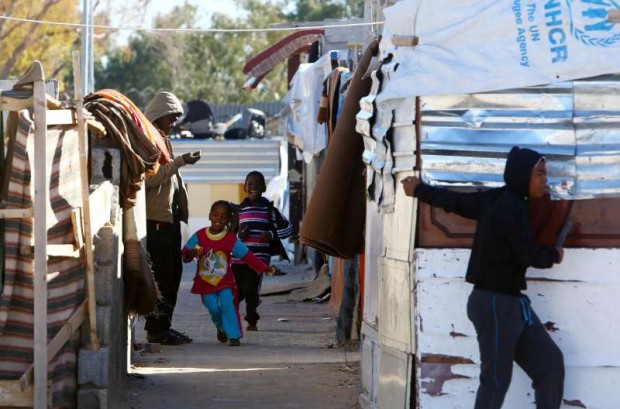 Two witnesses told Human Rights Watch that three rockets struck the Red Crescent Camp (also known as the Sports City Camp), killing three civilians and wounding seven others, including two children. At least one rocket struck the adjacent Istijaba Camp, the witnesses said, causing material damage but no casualties. There is no military or militia presence in either camp, the witnesses said. Red Crescent Camp residents are from the town of Tawergha in western Libya, where militias from nearby Misrata forcibly displaced 35,000 people in 2011, accusing the residents of serious crimes. Residents of Istijaba Camp include people from Tawergha as well as others from Misrata and Tomina.

“Firing rockets into displaced persons’ camps with no military present shows utter disregard for civilian lives,” said Joe Stork, deputy Middle East director. “Armed forces and militias need to do their utmost to protect civilians and ensure they are out of harm’s way.”

Firing rockets into displaced persons’ camps with no military present shows utter disregard for civilian lives. Armed forces and militias need to do their utmost to protect civilians and ensure they are out of harm’s way.

The current conflict raging in Benghazi, in eastern Libya, since July 2014, has displaced thousands of residents as a result of indiscriminate attacks on residential areas, killing civilians and damaging hospitals and other buildings, particularly in the downtown area.

The forces and militias fighting in the area include those aligned under the Karama (Dignity) military campaign, which has the support of the government and House of Representatives based in al-Bayda and Tobruk, one of two governments claiming legitimacy in Libya. These forces are fighting Islamist militias, including the Benghazi Revolutionaries’ Shura Council (BRSC) and the extremist group, Islamic State, also known as ISIS.

On January 19, after a year-long political process brokered by the United Nations, a newly formed Presidential Council based in Tunis nominated a cabinet for a national unity government, to be confirmed within 10 days by the House of Representatives. Neither of the two rival governments has endorsed the new cabinet.

The two witnesses, both Red Crescent Camp residents who asked not to be identified, told Human Rights Watch during phone calls on January 18 that the first missile struck the camp between 4:30 and 5 p.m., and that the attack continued for about a half hour. They said most injuries were from shrapnel after the rockets landed in the densely-populated camp, where the housing consists mostly of makeshift fiberglass piping.

The first rocket landed in a makeshift football field, they said, The next landed near a home, killing Hala Ahmed Saad immediately and hitting her husband, Milad Youssef Hosha, who died some hours later at al-Jalaa. Their two young sons, Mohamed, 5, and Ahmed, 4, had light injuries. The third missile struck near the home of Najwa Mansour Jomaa, who was seriously injured and died on January 17 at Hospital 1200.

One of the witnesses said that the rockets originated from the al-Qwarsha area, which is controlled by the Islamist militias. Human Rights Watch could not confirm the origin of the rocket strikes.

The Benghazi Municipal Council issued a statement on January 9 condemning the attack and accusing “terrorist groups” of firing the rockets and targeting the nearby Sports City.

One of the witnesses, who said he provided first aid to some of the victims, said:

It was total chaos and difficult to describe. The rockets struck in different areas of the camp and people started running around, they were really scared by the carnage and the blood. We tried to help the married couple, but the woman died on the spot. Once the strikes stopped, ambulances from the Red Crescent and others entered the camp to evacuate the injured, and residents used their own cars to get people to hospitals. There is no army anywhere near the Sports City or the camp.

The other witness said:

I was in my house when I heard a loud sound at the other end of the camp. I felt debris falling on the roof and so I ran outside toward the site of attack where my brothers and others were trying to help the injured. This is not the first time our camp is attacked with rockets since it is situated between positions of the extremist militias and the army to the north and west. Half of the buildings in the camp are affected by frequent shelling in adjacent areas. The security situation for us displaced is really dismal here, and we are afraid to speak up.

All parties to the armed conflict in Libya are required to abide by the laws of war. Certain serious violations of the laws of war, when committed with criminal intent, are war crimes. Those who commit, order, assist, or have command responsibility for war crimes are subject to prosecution by domestic courts or the International Criminal Court (ICC), which has jurisdiction over war crimes, crimes against humanity, and genocide committed in Libya since February 15, 2011, under UN Security Council resolution 1970.

UN Security Council Resolution 2213, adopted in March 2015, reaffirmed that the Council is ready to impose sanctions, including travel bans and asset freezes, on those it finds responsible for acts that violate applicable international human rights law or international humanitarian law or acts that constitute human rights abuses in Libya. Given the virtually complete impunity for abuses by all sides in the conflict, Security Council members should act on that threat and sanction individuals responsible for serious crimes to help keep the crisis from deteriorating further, Human Rights Watch said.