Clashes between Al-Kufra revolutionaries and Sudanese rebels kill over 30 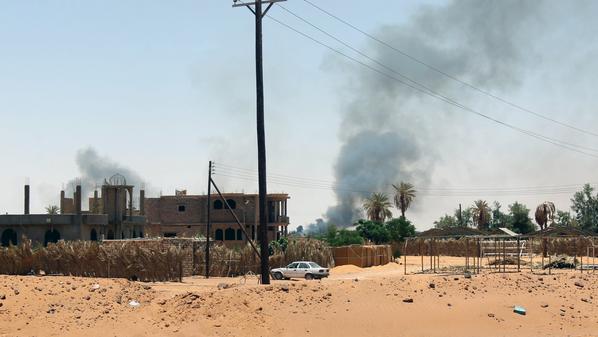 Two days of clashes in southeastern Libya between a local armed faction and Sudanese fighters have left more than 30 people dead, a local mayor said on Friday.

The commander of the Libyan Subul Assalam faction, Abdurrahman Hashim, said the Sudanese fighters were rebels from Sudan’s Darfur region who had moved into the area around the town of Kufra following the uprising that toppled Libyan leader Muammar Gaddafi in 2011.

He said his group was retaliating for armed robberies and attempted attacks on Kufra, in Libya’s desert south-east which shares a border with northwestern Sudan.

He said at least 20 Sudanese fighters were killed in an attack on a checkpoint 200 km north of Kufra and further clashes to the south of the town on Thursday.

Hashim said on Thursday that his men had destroyed and captured a number of vehicles. At least one of his men had been killed and six wounded in the fighting, he said.

Libya has been riven by instability since Gaddafi’s fall, with competing factions and loose alliances of armed groups fighting for political power and the country’s oil wealth.

There are two rival parliaments and governments, one based in Tripoli and the other in the east.

The conflict has spread to the country’s impoverished south, where there have been frequent outbreaks of fighting, often between the Tebu and Tuareg tribal groups.

Kufra mayor Bou Khalil said the Subul Assalam faction included rebels who fought against Gaddafi and backed Libya’s eastern government and armed forces. However, it was not clear whether the latest clashes were directly linked to Libya’s wider conflict.

For: Clashes between Al-Kufra revolutionaries and Sudanese rebels kill over 30