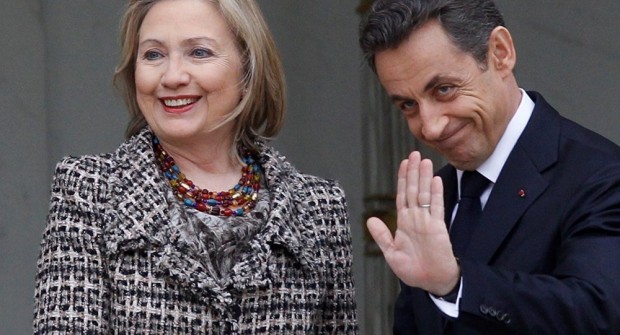 The release of a fresh batch of emails from the private account of former US Secretary of State Hillary Clinton has revealed that one of her senior advisers believed France’s true motivation for toppling Muammar Gaddafi in 2011 was not to push democracy, but related to the pursuit of Libyan oil.

Sidney Blumenthal, a long-time associate of Ms Clinton who was not formally employed by the US State Department but was on the payroll of the Clinton Foundation, sent the presidential hopeful a series of intelligence memos in 2011, suggesting that France had a hidden agenda behind its decision to lead the allied bombing of Libya.

What @POTUS fails to mention about #Libya we can probably glean from @HillaryClinton's classified emails. #SOTU

According to the emails, which Blumenthal said contained information from “knowledgeable sources” French President Nicolas Sarkozy was primarily driven to intervention in Libya in the hope of being able to gain access to the country’s vast oil reserves, rather than his public assertion to free the people from Gaddafi’s dictatorship.

On top of the pursuit for oil, another one of Blumenthal’s emails, sent on April 2, 2011 and titled “France’s client/Q’s gold” suggested the military intervention in Libya was also designed to stop Gaddafi’s plans to use US$7 billion worth of gold and silver assets to set up a new pan-African currency.

According to the email, the establishment of such a currency would undermine French influence on the continent as it would impact the CFA Franc currency, which is guaranteed by the French treasury and used in many west African countries as a link between Paris and some of its former colonies.

In addressing Sarkozy’s concerns over the new currency, Blumenthal wrote: “This was one of the factors that influenced [his] decision to commit France to the attack on Libya.”

Despite proposals for the creation of an African currency being well known, many researchers have dismissed suggestions that France was motivated to intervene in Libya in order to prevent its establishment.

French investigative journalist Fabrice Arfi, who worked on uncovering alleged links between Sarkozy and Gaddafi, says he’s not convinced the Blumenthal memos were a true representation of France’s motivations in Libya.
“At first glance, this hypothesis [that France’s intervention was motivated by Gaddafi’s plans for a Pan-African currency] seems far-fetched. Personally, I don’t have any elements that accredit this theory, but that doesn’t necessarily mean it is false,” he told Vice News.

Additionally, Sarkozy has emphatically denied France was motivated by oil in Libya, while many experts have also raised their skepticism, saying there were many seemingly baseless rumors surrounding the motivations of western intervention in Libya at the time.

While there is debate over the validity of Blumenthal’s claims, the release of the emails shows that Clinton, along with other top US officials, were unsure of France’s agenda in Libya, as many of the emails were forwarded onto her staff for further investigation.

There have been many media reports in the past hinting at a connection between France’s intervention and pursuit of oil, with the French newspaper Liberation in 2011 publishing a letter from Libya’s rebel-backed National Transitional Council, which promised to reserve 35 percent of the country’s crude oil reserves for France in return for its “total and permanent support.”

This suggestion was backed by another previously released Blumenthal email, which claimed that French intelligence officers from the DGSE met with Libyan transitional council figures to discuss the oil industry in the post-Gaddafi-era.

The memo, which was dated March 22, 2011 — the same week as the military operation in Libya began — claimed that French intelligence held a series of “secret meetings” with Libyan officials in the hope of securing favoritism for the country’s oil resources.

“In return for their assistance… the DGSE officers indicated that they expected the new government of Libya to favor French firms and national interests, particularly regarding the oil industry in Libya,” the memo read.


The views expressed in Op-Ed pieces are those of the author and do not purport to reflect the opinions or views of Libyan Express.
How to submit an Op-Ed: Libyan Express accepts opinion articles on a wide range of topics. Submissions may be sent to oped@libyanexpress.com. Please include ‘Op-Ed’ in the subject line.
Share
Submit a Correction
Sign up for our Newsletter.