Experts investigate possible causes of worst stranding on the English coast since records began in 1913, while people flock to sites to take photos

A fifth dead whale has been found washed up on the Lincolnshire coast, several miles from four other members of the same pod, marking the worst sperm whale stranding off the English coast since records began in 1913.

The fifth whale was discovered by a member of the public on Monday afternoon on a former weapons range in Lincolnshire where the second world war Dambusters squadron practised bombing runs.

Onlookers have been told to stay away from the land, which was sold by the Ministry of Defence six years ago, and it remains inaccessible to scientists amid warnings that it may be strewn with unexploded bombs.

Scientists believe that the whales, all members of the same pod, were hungry and dehydrated but alive when they were stranded in shallow waters during their search for food. Sperm whales are deep sea creatures and can easily become disoriented if they get into shallow water.

One of the Skegness whale bodies “exploded” when pathologists cut it open, and Rob Deaville, project manager at the UK Cetacean Strandings Investigation Programme, a Defra-funded group that investigates whale deaths, said the quickly decomposing state of the carcasses made it “much harder to gain any pathologically useful information”.

According to Deaville, their investigations found little in the whales’ intestines apart from “some squid beaks and some little fragments of plastic”. He said this suggested the whales died when the weight of their own bodies caused their internal organs to collapse.

“This is an unusual event and the question hanging is why they were in the North Sea in the first place,” said Deaville. With a lack of food and shallow, disorientating waters for a deep sea animal, “they were always up against it unless they could find their way out through the big open end between Norway and Scotland.”

Thousands of people have flocked to the tourist resort of Skegness to see the whales since Sunday, with onlookers taking selfies in front of the huge carcasses as marine biologists cut away chunks of flesh and bone.

Experts are investigating whether the whales are linked to 12 more that have washed up on the Dutch island of Texel and the German islands of Wangerooge and Helgoland since 11 January. 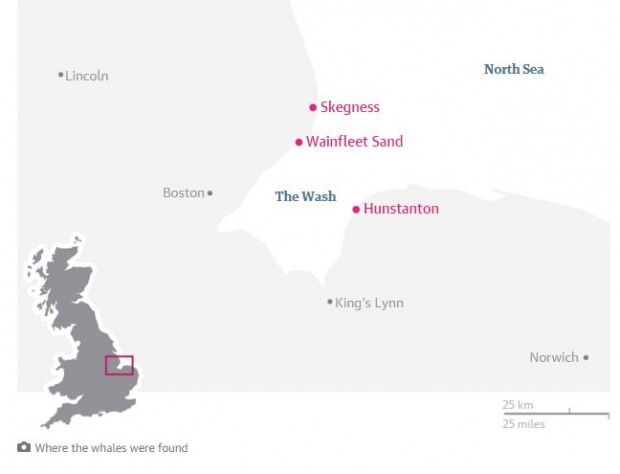 There was controversy after anti-nuclear activists sprayed two of the dead whales with graffiti. The message “Fukushima RIP – man killed me” was daubed in white paint along the back of one, and “CND” was sprayed on the tail of another.

James Gilbert, of East Lindsey district council, said it was “very unfortunate” that activists had targeted the dead whales. “It’s incredibly sad to graffiti such a beautiful animal,” he said.

The council has applied for a licence from the Marine Management Organisation to remove the carcasses as soon as postmortem examinations are complete. That is expected to happen in the next few days, he said.

“They have been cordoned off. The very clear message we’re giving to people is while we understand people do want to come and have a look because it’s a once-in-a-lifetime opportunity, please don’t touch. We put all the cordons in place first thing Saturday morning but some people do have the enthusiasm to want to touch,” Gilbert said.

He estimated that crowds “in the low thousands” had been drawn to Skegness over the weekend to see the whales. As he spoke, a crowd of around 100 spectators had gathered around the two whales found side by side on the beach as a scientist from the Zoological Society carried out his work.

Gilbert added: “It’s an educational experience for some people. It’s just incredibly sad to see such beautiful animals in that space at the same time.

“There’s no doubt about it – there’s an awful lot of people in the resort and quite a few people have come here because of the whales. Skegness, for the past few days – although it’s a very sad reason why – has been all over the broadcast media, print media and people have certainly come as a result of hearing and reading about it.”

For: Dead whales wash up on British beach