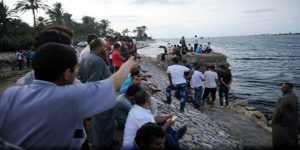 The number of bodies recovered after a migrant boat capsized off the Egyptian coast on Wednesday has reached at least 162, as the search continues.

The boat was carrying between 450 and 600 migrants when it sank eight miles (12km) off the port city of Rosetta.

It was transporting Egyptian, Syrian, Sudanese, Eritrean and Somali migrants.

Authorities said at least 163 people have been rescued but survivors told the BBC that hundreds more may have drowned.

Speaking to the BBC’s Orla Guerin in Rosetta, survivors said smugglers forced anyone who wanted a lifejacket to pay extra.

The boat, which was kept off the coast for five days as more migrants were brought on board, is said to have capsized after a final group of some 150 people were crammed onto the vessel.

The incident came as the EU’s border agency warned that increasing numbers of Europe-bound migrants are using Egypt as a departure point.

More than 10,000 people have died crossing the Mediterranean towards Europe since 2014, according to the UN.

For: Death toll of Egyptian capsized boat rises to 162