Death toll of Indonesia’s earthquake and tsunami hit over 800 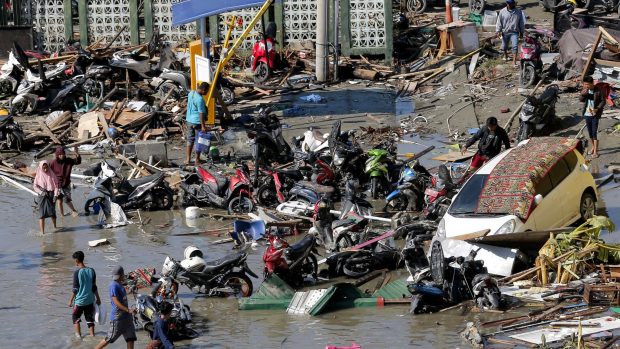 The death toll more than doubled to over 800 in Indonesia Sunday, two days after a powerful 7.5 magnitude earthquake struck the island of Sulawesi and triggered a tsunami that hit the coast soon after.

Rescue officials are worried that the extent of the disaster could climb far past the more than 832 already confirmed dead, as several large coastal towns are still isolated because of damaged roads and downed communication lines. The country’s disaster agency said nearly all of those were from the devastated city of Palu on Sulawesi.

“The death toll is believed to be still increasing since many bodies were still under the wreckage, while many have not been reached,” said agency spokesman Sutopo Purwo Nugroho. He added that a mass burial for up to 300 bodies would be held Sunday for health and religious reasons. The majority of Palu’s inhabitants are Muslim.

The main tremor struck at 6:02 p.m. local time Friday evening (6:02 a.m. EDT) about 35 miles northeast of Donggala, Indonesia – a town of about 300,000 – according to the U.S. Geological Survey. Shortly after, a tsunami warning was issued by Indonesia’s geophysics agency, then lifted.

A reported 10-foot-tall tsunami struck Donggala and Palu, the capital of Central Sulawesi province, not long after the alert was canceled. Hary Tirto Djatmiko, a spokesman for the agency, confirmed the tsunami.

“Based on historical data and tsunami modeling, this earthquake is not capable of generating a tsunami affecting the Indian Ocean region,” said the Meteorological, Climatological and Geophysical Agency of Indonesia in a statement released prior to the tsunami’s arrival.

Bodies covered in blue and yellow tarps lined the streets of Palu, while rescuers dug through rubble in the hopes of finding survivors from the twin disasters that struck Friday evening.

The views expressed in Op-Ed pieces are those of the author and do not purport to reflect the opinions or views of Libyan Express.
How to submit an Op-Ed: Libyan Express accepts opinion articles on a wide range of topics. Submissions may be sent to oped@libyanexpress.com. Please include ‘Op-Ed’ in the subject line.
Indonesia
Share
Submit a Correction
Sign up for our Newsletter.

For: Death toll of Indonesia’s earthquake and tsunami hit over 800