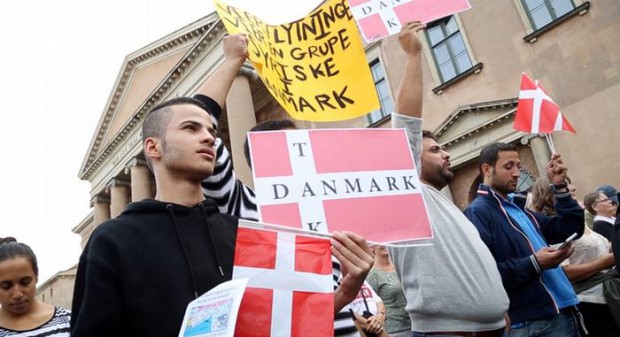 European states have reacted in some of the most drastic ways yet to the continent’s biggest migration crisis since the second world war, with Denmarkenacting a law that allows police to seize refugees’ assets.

The vote in the Danish parliament on Tuesday, which followed similar moves in Switzerland and southern Germany, came as central European leaders amplified calls to seal the borders of the Balkans, a move that would risk trapping thousands of asylum seekers in Greece.

Under the new Danish law, police will be allowed to search asylum seekers on arrival in the country and confiscate any non-essential items worth more than 10,000 kroner (£1,000) that have no sentimental value to their owner.

The centre-right government said the procedure is intended to cover the cost of each asylum seeker’s treatment by the state, and mimics the handling of Danish citizens on welfare.

Elsewhere in Europe, the Czech and Slovakian prime ministers condemned Greece’s inability to prevent hundreds of thousands of refugees from moving onwards to northern European countries.

They jointly called for increased border protection to block the passage of refugees from Greece, a day after EU interior ministers said they were willing toconsider the suspension of the Schengen agreement that allows free passage between most EU countries.

Robert Fico, the Slovakian prime minister, said: “There must be a backup plan, regardless of whether Greece stays in Schengen. We must find an effective border protection.”

The idea outraged the Greek government, which must now consider the possibility of hundreds of thousands of refugees being unable to leave Greece, which is struggling with high unemployment and economic strife.

Nikos Xydakis, Greece’s alternate foreign minister for EU affairs, called the idea “hysterical” and warned that it could lead to the fragmentation of Europe. “If every country raises a fence, we return to the cold war period and the iron curtain. This isn’t EU integration – this is EU fragmentation.”

The Greek government faces calls to take tougher action to block the passage of the thousands of refugees arriving in Greece by boat every day, but Xydakis said the only way of stopping them would be to shoot them – an option that Greece was not willing to take, even if it meant being fenced in.

“If Europe is to put Greece in a deep humanitarian crisis, let’s see it [happen],” he said in an interview with the Guardian on Tuesday. “We are in the sixth year of a depression and [have] unemployment of 25% … But if our colleagues and partners in the EU think that we have to let people drown or sink their boats, we can’t do that. Maybe we will suffer, but we will manage.”

Amid the disagreement, the UN said the prospects of Europe standing together to share the burden of the refugee crisis seemed ever more distant.

Peter Sutherland, the UN secretary general’s special representative for international migration, said: “Day by day, the likelihood of a common European approach to the migrant crisis seems to be receding – and such a common approach is indispensable to finding any solutions.”

The darkening mood was embodied by Denmark’s decision to seize refugee assets, a move that the UN described as concerning and regrettable. An academic specialist confirmed that Danes are expected to use their own income before claiming benefits, but pointed out that except on rare occasions, police do not have the right to search Danish welfare claimants.

Rights campaigners have criticised the laws, which will also prevent refugees from applying to be reunited with their children for three years, and will only give war refugees from Syria one year of protection.

But opponents of the law argue that while refugees can in general still expect to be treated humanely in Denmark, the legislation is ethically unsound. Pernille Skipper, a member of parliament and the legal affairs spokesperson for Enhedslisten, a leftwing Danish party, said: “Morally, it is a horrible way to treat people fleeing mass crimes, war, rapes. They are fleeing from war and how do we treat them? We take their jewellery.”

Asylum seekers in Denmark burst into tears when they heard the news that the law had passed.

Jean Claude Mangomba, a 48-year-old English teacher and former army officer, fled Kinshasa in the Democratic Republic of the Congo after he was arrested for supporting a priest who opposed the Congolese regime. “Most people are fleeing war, they are running away, and when they flee they take with them all that they can. That doesn’t make them wealthy or criminals,” he said.

“And if they bring money with them, it will help Denmark. They will exchange the money into Danish kroner and spend it here. So why does the Danish government want to take this money away from them, take away their valuable objects? It makes no sense.

“The new law is very bad, really they just want to send us back. I didn’t choose to come here, I came here suddenly, I fled, I was lucky to get out, I was desperate.

“I have not seen my wife and three children for three years. With the new law, it will take many more years before I can see them again. I am losing hope. The asylum system here kills people slowly.”

Klaus Petersen, a professor at the Centre for Welfare State Research near Odense, confirmed that Danish welfare claimants have to give up their savings before they receive benefits – but not their valuables, unlike refugees. They will also not be searched, except in rare circumstances.

“A Danish citizen could be searched in an extreme case if the municipality has a suspicion of fraud, but you need court permission to do so. For refugees, you would not need a court permission,” he said.

A regional spokesman for the UN refugee agency, Zoran Stevanović, said: “Denmark has traditionally been an inspiration to others for setting human rights standards. However, rather than showing and providing solidarity and sanctuary, Denmark is focusing on developing and implementing individual and restrictive responses. UNHCR regrets that Denmark is introducing restrictions to its asylum policy rather than focusing on building and promoting a fair distribution of asylum seekers within all countries in the EU.

“The law introduces restrictive measures on asylum seekers that increasingly hinder their ability to apply for asylum in Denmark. We are particularly concerned by reduced social benefits and restricted access to family reunification. We are also concerned that refugees with temporary protection are only allowed to reside in Denmark for one year and yet are only able to apply for family reunification after three years.”

Crying in the aftermath of the law’s implementation, Zohra, 21, from Afghanistan, said: “To refugees thinking of coming to Denmark, I would tell them: if there is any chance you can stay where you are, then don’t come here to Europe, especially to Denmark. The Danish government is making harder and harder rules for everyone.

“People are not coming here just for fun, they have enormous problems at home. When I decided to flee Afghanistan, I didn’t chose a country to go to because it’s nice or rich, I just came here to be safe, to live. We have only a little money, but we need it to live, to start a new life with that money.”

For: Denmark to confiscate refugees assets and tighten residency measures