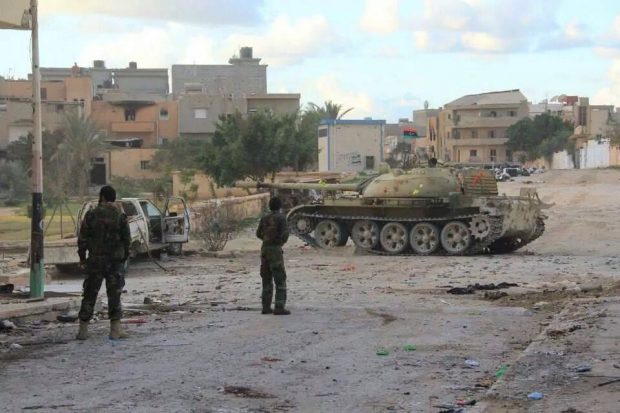 The forces of Dignity Operation (Karama) led by Khalifa Haftar, pulled out of the Chinese Building neighbourhood in down town Benghazi, sources close to Benghazi Shura Council reported.

The sources, who asked to remain unidentified, said armoured vehicles and a tank for the Dignity Operation forces were seen retreating from the neighbourhood due to the fierce clashes between them and the fighters of Benghazi Shura Council Tuesday morning.

“The air force of Dignity Operation was not able to carry out airstrikes on the Chinese Buildings neighbourhood due to bad weather.” The sources added.

On the other hand, Benghazi Defense Brigades, led by General Brigadier, Mustafa Al-Shirkcy, announced the kickoff of the operation “Volcano of Wrath”, which aims at defending Benghazi and its residents, the sources indicated.

Meanwhile, Benghazi Defense Brigades advanced on Monday more into the west of Benghazi city taking control of a Dignity Operation’s (Karama’s) field hospital on the way on.