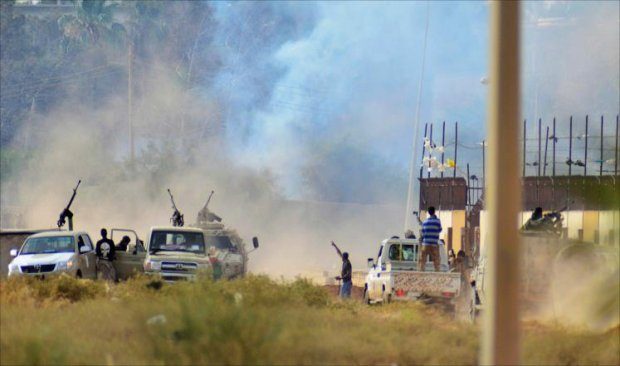 Five members of a North Darfur family were killed in an air raid in Benghazi in Libya on Friday.

A Sudanese friend of the victims told Radio Dabanga on Sunday that a fighter jet dropped two bombs on a residential building in the Ganfuda district in Benghazi at 4 am.

“Father Mohamed Adouma, his wife Safa Mansour, their son Mohamed, and their daughters Ranya and Hiba died instantly. Daughters Awadiya and Fatima were injured, and Lina and Reil are safe,” he said. A number of people with other nationalities were killed as well.

The source called on the Libyan authorities “to provide a way out for the civilians who are stuck in the city, that is witnessing fierce fighting”.

The spokesmen for the Sudanese Foreign Ministry, Ambassador Gariballah El Khidir, confirmed the death of the five North Darfuris on Sunday. He told reporters in Khartoum that the Sudanese consulate in Benghazi sent a report about the bombing of Ganfuda.

According to the consulate, one of the Libyan warring groups tried to use about two hundred Sudanese in the district as human shields during the escalation of the fighting over the past four days.

He said that the consulate contacted the Libyan Foreign Office of Al-Thinni government in Bayda city, and requested a safe passage for the besieged Sudanese in Benghazi.