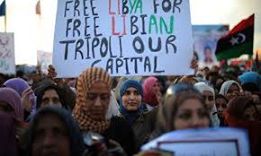 Libya is in crisis. After the removal of the brutal dictator Muammar Gaddafi in 2011, Libya has unfortunately disintegrated into a state in little more than name, without the stability and leadership of any government. The country is being held back and fragmented through tribal infighting and most worryingly Daesh has established strongholds around Libya, including the cities of Sirte and Sabratha and even in areas surrounding Benghazi.

It is reported that the vast majority of Daesh fighters based in Libya are not Libyan nationals and the movement does not have roots within the country. Daesh is deeply unpopular with Libyan citizens and they have struggled to motivate and indoctrinate Libyan citizens.

The American military are currently conducting airstrikes on Daesh targets within Libya. The Secretary of State for Defence has personally authorised the use of RAF Lakenheath to allow these airstrikes to be launched from within the United Kingdom. The UK Government has been coy on what role, if any, our military will take to support the US military in their fight against Daesh in Libya, however the likelihood of the UK Government committing to military intervention in Libya is increasing.

In PMQs last week David Cameron confirmed that if the UK Government was to state the case for military intervention in Libya, it would be subject to a vote in the Commons. I am therefore writing today to gain a perspective from Lib Dem members on this issue. Following the concerns expressed by some members of the lack of discussion with MPs on the party’s decision to support military intervention against Daesh in Syria, I would welcome comments or suggestions ahead of a vote, which could be called in the near future.

For: Do Britons support UK intervention in Libya?