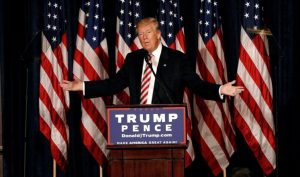 Mr Trump unleashed an attack on Mr Ryan after the highest-ranking Republican said he would not defend the candidate.

Mr Ryan is the latest Republican not to back Mr Trump after a 2005 video emerged showing him making obscene comments about groping women.

Renewed party divisions over Mr Trump come as a new poll shows him 11 points behind his rival Hillary Clinton.

The PRRI/Atlantic poll released two days after the second US presidential debate suggested Mrs Clinton holds a 49-38 lead over her opponent.

A video released on Friday revealed Mr Trump describing how he had sought to have sex with a married woman and making other sexually aggressive comments about women.

The controversy prompted dozens of Republican lawmakers to rescind their support for Mr Trump less than a month before election day.

Mr Trump fired back in a string of tweets, saying the “shackles” had been removed, allowing him to “fight for America the way I want to.”