Rescue efforts are under way in Ecuador after the country suffered its worst earthquake in decades, with at least 77 people confirmed dead.

The powerful magnitude-7.8 quake struck early on Saturday evening and was felt as far away as neighbouring Colombia.

Coastal areas in the north-west were closest to the epicentre and officials say the death toll is likely to rise as information begins to come in.

“We have information that there are injured people who are trapped [under rubble] in different districts and we are getting ready to rescue them.”

Helicopters and buses are ferrying troops north but have been hampered by landslides.

Mr Glas said food and other essentials were being handed out and international aid was also beginning, with the first coming from Venezuela and Mexico.

President Rafael Correa, who is flying back from a trip to Italy, has decreed a state of emergency, calling on his country to be “calm and united”. 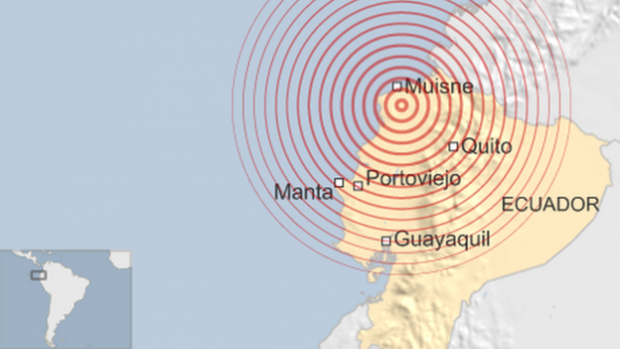 At least 500 people were injured in the quake, which was felt across the country.

Widespread severe damage is reported, with a bridge destroyed as far south as Guayaquil about 300km (190 miles) away.

Gabriel Alcivar, mayor of Pedernales, close to the epicentre, said the “entire town” had been flattened.

“We’re trying to do the most we can but there’s almost nothing we can do,” he added, warning that looting had broken out.

In badly hit Manta, one woman said: “The third floor collapsed on top of us.

Cristian Ibarra Santillan was in the capital Quito when the quake struck.

“There had been some small tremors going on for about two or three months and I thought it was one of those but after about 20, 30 seconds it started to get really strong,” he told the BBC.

“And I grabbed my dog and I hid under the table. But then I realised that it wasn’t going away so I just ran with him outside.”

The quake is Ecuador’s largest since 1979. More than 130 aftershocks have followed.

The US Geological Survey said the earthquake struck at a fairly shallow depth of 19.2km (11.9 miles), about 27km from Muisne in a sparsely populated area.

David Rothery, a professor of geosciences at The Open University, said Ecuador’s quake was about six times as powerful as the earthquake that struck southern Japan on Saturday.

The quake was also felt in Colombia, where patients in a clinic in the city of Cali were evacuated from the building.