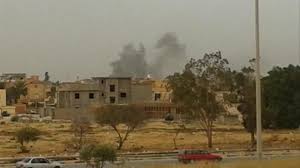 East Libyan forces said on Wednesday they had taken complete control of a long contested district, Ganfouda, in Benghazi, after dozens of families and captives trapped by fighting left the area, according to Reuters.

Local sources from the Benghazi Shura Council confirmed to local media outlets that the clashes are still ongoing in Ganfouda between them and the Operation Dignity forces, who are using heavy air bombardment to force the civilians out.

“The liberation of Ganfouda is complete,” Operation Dignity spokesman, Ahmed al-Mismari, told Reuters. He added however that the army was yet to secure a separate area known as the “12 Blocks” which lies between Ganfouda and Bosnaib, another neighbourhood recently taken by the Haftar-led forces, according to Al-Mismari. .

A spokesman for the Operation Dignity’s Zawiya Martyrs’ brigade, Wahid al-Zawi, said 62 captives had been freed from Ganfouda, as well as 30 families and 46 foreign workers, Reuters reported Wednesday.

The fate of civilians trapped in Ganfouda had been a major point of contention, with the United Nations and international human rights groups calling for them to be granted safe passage amid allegations of human rights abuses by both sides.

Some 30 LNA troops were killed and 25 wounded during the past two days of fighting in Ganfouda, a medical source was cited by Reuters as saying.