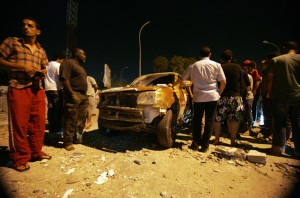 At least three people were wounded in a bomb blast outside Benghazi’s Birkah police station on Tuesday (July 23rd).

He added that Special Forces apprehended three suspects. They were caught carrying explosive devices weighing a half kilogram each.

The attack was just the latest in a string of assaults on government security institutions in the east. Tuesday’s bombing was the fourth such attack on the Birkah police station alone.

Meanwhile in Sirte, the court and prosecution offices compound was hit by an explosive device thrown at one of the administrative offices. The device smashed the glass, burned some documents and led to the injury of one member of the judicial police who was guarding the compound, according to a security source in the city.

Last Sunday, Musaida border crossing with Egypt in the east of the country was also bombed. Security sources said that people attacked the crossing with RPGs while the building was empty.

The sources said smugglers were suspected in the attack, adding that the border region was witnessing chaos due to the absence of government agencies and security forces.

“Attacking the Libyan border and destroying peace in this manner is far too scary,” said Tobruk resident Awad Chaari. “The dominance of smugglers and the silence of those in charge is a very dangerous sign.”

He added, “I humbly ring the alarm bell and strongly appeal to all national figures in the army or police to intervene in order to protect Libyan soil.”

Chaari said the matter was more serious than it appears. “The issue is much deeper than what smugglers, corrupt people and those who sell their homeland for a pittance imagine,” he said.

In other incidents of unrest, unidentified masked gunmen on Monday evening fired bullets from their car at Salem Abu Rouis, one of the members of the internal security apparatus of the former regime in Misrata, while he was leaving a shop before Maghreb prayer. He died on the spot.

Gunmen also assassinated another former regime official in Derna on Sunday afternoon. The retired colonel was about 70 years old, according to LANA.

Jawhara Radio host Muhamad Najom, 22-years-old, said there have been 12 assassinations in the month of Ramadan.

“We wanted it to be a revolution of dignity, democracy and law with thought and opinion,” said Osama al-Rajhi, a 36-year-old engineer from Tripoli. “However truth to be told the revolution came from 40 security military and intelligence units as well as 60,000 members from the army and security.”

He pointed out that there were now 80 security units with 150,000 members but only on paper, providing neither security nor stability. “The regular army is absent and the regular police are marginalised. Our money is vandalised with electricity outages and security lapses,” he added.

“Libya entered a dark stage and became a hotbed of terrorism,” commented Mohamed Chaafi, a 49-year-old Tripoli resident. “There are a large number of wanted foreign terrorist leaders in Libya. There is no such thing in Libya as a state.”