An Emirates Airbus A380 jet has made what is believed to be the current longest non-stop scheduled commercial flight by distance.

The plane covered about 14,200km (8,824 miles) when it touched down in Auckland, New Zealand on Wednesday.

It was expected to be the world’s longest non-stop commercial flight by duration as well, but landed too early. 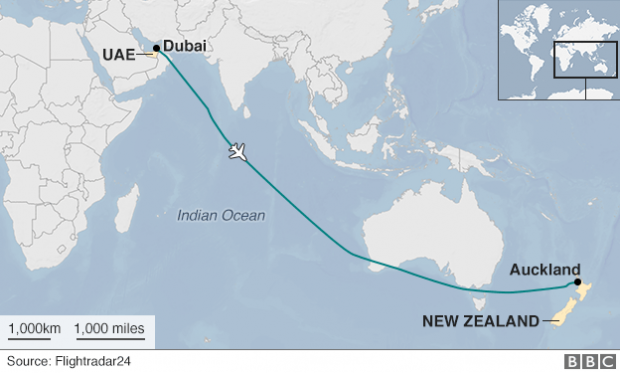 The return flight to Dubai left around 22:20 local time (15:20 GMT), according to New Zealand media.

The Auckland-Dubai portion was estimated to take around 17 hours and 15 minutes, but in the end took only 16 hours and 24 minutes, according to the New Zealand Herald.

The inaugural flight was made by an A380, but the route will normally be operated by a Boeing 777-200LR.

The new route has beaten the Dallas-Sydney flight operated by Qantas, previously the longest flight by distance, covering 13,800km (8,578 miles).

The Qantas service, however, remains the world’s longest flight in duration – 16 hours and 55 minutes.

But this may not last long, as Emirates plans to launch a Dubai-Panama City service later this year or early in 2017 that will take 17 hours and 35 minutes.

Qatar Airways has also announced plans to launch even longer flights – from its hub in Doha to Santiago, in Chile, and also to Auckland, Bloomberg reported.

And Singapore Airlines revealed plans last year to bring back its Singapore-New Jersey service in 2018. The flight will apparently cover some 15,300km (9,500 miles) in 19 hours.