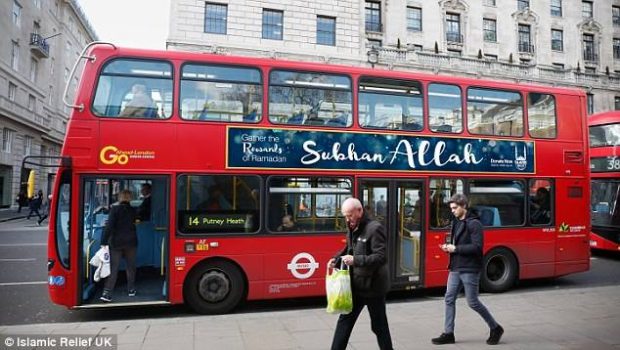 Hundreds of buses will carry posters bearing the words ‘Subhan Allah’, which means ‘Glory be to God’ in Arabic, for an ad campaign paid for by the charity Islamic Relief. The posters will appear in London, Manchester, Leicester, Birmingham and Bradford, which have large Muslim communities.
The adverts will start running in the capital from May 23.

Islamic Relief, Britain’s biggest Muslim charity, came up with the advertisements with the line ‘Subhan Allah’ – meaning ‘Glory be to God’ (pictured). It has been timed to coincide with the holy month of Ramadan in June, when Muslims traditionally fast and give to charity.

But last night, Christian groups asked why the Islamic adverts had been approved when a one-minute film by the Church of England was banned by Britain’s biggest cinema chains at Christmas.

Islamic Relief said the posters would help to raise funds for victims of war and disasters in countries such as Syria, and portray Islam in a positive light.

Director Imran Madden said: ‘There is a lot of negativity around Muslims. We want to change the perception of Islam. The campaign is about breaking down barriers and challenging misconceptions.’ The slogans are most likely to resonate in London where about half of Britain’s estimated three million Muslims live.