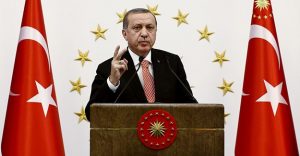 President Recep Tayyip Erdogan said Wednesday it was Turkey’s duty “to its brothers to blow out the fire in Aleppo”.

Addressing elected neighborhood representatives from around Turkey at the presidential complex in Ankara, Erdogan said at least “one million people would flock to Turkey if an exodus starts in Aleppo”.

“With all due respect, we will not pay the price for that,” the Turkish leader added.

Since Sept. 19, when the Bashar al-Assad regime announced the end of a week-long truce sponsored by Washington and Moscow, Syrian and Russian warplanes have pounded opposition-held parts of Aleppo.

Scores of civilians have reportedly been killed or injured in the attacks.

Syria has been locked in a vicious civil war since early 2011, when the Assad regime cracked down on pro-democracy protests — which erupted as part of the “Arab Spring” uprisings — with unexpected ferocity.

The Syrian Center for Policy Research, a Beirut-based NGO, has put the total death toll from the five-year conflict at more than 470,000.

For: Erdogan says Turkey’s mission is to “extinguish” fire in Syria’s Aleppo