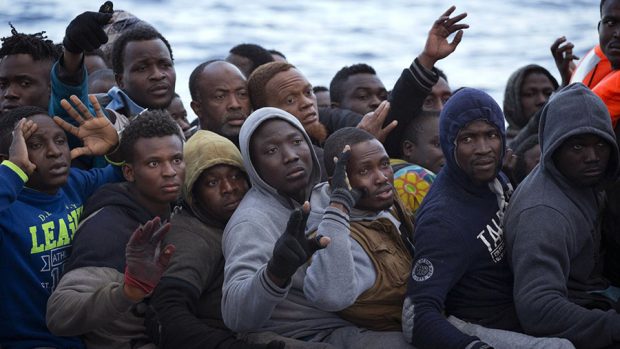 Italian and European officials said on Monday they are ready to send equipment and economic aid to Libya to help it fight people smuggling, as the leader of Tripoli’s U.N.-backed government sought more resources.

The prime minister of the U.N.-backed government in Tripoli, Fayez al-Seraj, spoke to the group behind closed doors and “asked for more money and equipment,” said a source present but unauthorized to speak to the media.

“Now there must be very significant investments,” Italian Interior Minister Marco Minniti told reporters after the meeting. “There’s a total and absolute commitment to do this.”

Rescuers picked up about 3,300 migrants from rubber boats off the coast of Libya on Sunday. Boat arrivals to Italy have surged about 50 percent compared to the same period last year.

Of the 200 million euros ($215.04 million) the EU set aside last month to fight smuggling in the central Mediterranean, 90 million euros was earmarked for Libya, Avramopoulos said. Italy has set up a separate 200-million-euro fund to help African countries control their borders.

Seraj is seeking a total of 800 million euros and has compiled a long list of needed equipment, including four helicopters and a total of 20 boats, Italy’s Corriere della Sera newspaper reported on Monday.

Smugglers are thriving in the power vacuum left after the overthrow of former Libyan strong-man Muammar Gaddafi in 2011. Two governments are now vying for control – in Tobruk to the east and Tripoli to the west – and the country is mired in factional fighting.

The first of 10 patrol boats promised to Libya’s coast guard will be sent by mid-May, Minniti said. Neither he nor Avramopoulos said when other aid may be allocated.

Migrants stopped by the Libyan coast guard will be brought to camps managed by the Tripoli government, but which will be assisted by U.N. humanitarian agencies and the EU, Minniti said.

“There will be camps that are created together with the humanitarian organizations in full respect of peoples’ rights,” Minniti said, adding that migrants will be able to seek asylum in Europe from the Libyan camps.

For: EU agrees to pay more cash for GNA to fight human-trafficking in Libya