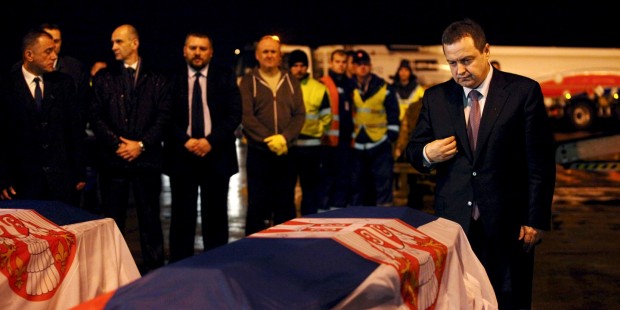 DESPITE PENTAGON EVASIONS, evidence is mounting that a U.S. airstrike against an ISIS training camp in Libya last month killed two Serbian diplomats who were being held at the site. The Pentagon erroneously believed that no civilians were at the camp at the time of the attack, according to Serbian and Libyan officials interviewed by The Intercept.

The diplomats, who were staffers at the Serbian Embassy in Tripoli, were kidnapped during an attack in early November on a diplomatic convoy near Sabratha, a coastal city 50 miles west of the Libyan capital. Serbia’s ambassador, Oliver Potezica, who was traveling with his wife and two sons in the three-vehicle convoy, escaped unharmed, but Sladjana Stankovic, a 41-year-old communications officer, and Jovica Stepic, a 60-year-old driver, were taken by the attackers.

On February 19, the Pentagon announced it had conducted an airstrike on an ISIS training camp in a farmhouse near Sabratha. The principal target of the attack was Noureddine Chouchane, a Tunisian national described as a “senior facilitator” for ISIS in Libya and a prime suspect in two deadly attacks in Tunisia last year. The strike, which involved fighter jets and drones, was authorized by President Obama. At the time, Pentagon press secretary Peter Cook characterized the attack as “very successful” and made no mention of any civilian casualties.

The day after the attack, Belgrade announced that Stankovic and Stepic had died in the bombing. “Apparently, the Americans were not aware that foreign citizens were being kept there,” Prime Minister Aleksandar Vucictold reporters.

“We have seen reports that two Serbian hostages have been killed in Libya,” Cook said on February 20. “At this time, we have no information indicating that their deaths were a result of the strike that U.S. forces conducted. … Our forces watched this training camp for weeks leading up to the operation, and at the time of the strike, there were no indications of any civilians present.”

Belgrade backed up its account a few days later with the results of autopsies conducted in Serbia that concluded the types of injuries sustained by the two diplomats were consistent with a bombing.

But the Pentagon continued to dispute the Serbian accounts. Capt. Jeff Davis, a military spokesperson, said on February 24 that an analysis of photos posted online of the two bodies offered no proof they were killed in the airstrike. “It was not consistent with what we would expect human remains to look like following a strike of that magnitude,” he said,according to AFP.

“When there are 12 wounds on a body sustained simultaneously, unequivocally from an explosion, then [the Pentagon] must show us any kind of evidence that would drag us into any other kind of story,” Vucic stated. “It would have been nicer if they said, ‘We’re sorry, Serbs and Stepic and Stankovic families.’”

According to a senior security official at the Serbian Security Information Agency, known by its acronym, BIA, intelligence agencies from a number of countries — including the U.S., Serbia, Italy, Spain, and France — were sharing information about the hostages while they were still alive. The agencies all believed the hostages were being held in one of four or five possible sites within a 10 kilometer radius of each other, according to the security official. The most credible intelligence pointed to one house in particular, located some 5 kilometers (3.1 miles) from the camp that was bombed by the U.S.

The security official, who asked to remain anonymous because he was not authorized to discuss the case, said the discovery of Stankovic’s and Stepic’s bodies came as a big surprise to Serbian intelligence, as the ISIS camp was not among any of the suspected sites. The camp was 700 to 800 meters from the spot where the two diplomats were abducted in November, leading Serbian intelligence to conclude that they were brought to the farmhouse and held there for their entire time in captivity. The official added that Serbian intelligence now believes the hostages were never allowed outside, which would explain why U.S. surveillance did not apparently spot any indication of civilians at the site in the run-up to the strikes.

The deaths of the Serbian hostages and the apparent shortfalls in U.S. military intelligence are similar to a CIA drone strike in Pakistan last year that killed two kidnapped foreign aid workers. Both cases involve the U.S. surveilling and bombing a target without apparently realizing Western hostages were being held at the site. In April 2015, the White Houseannounced that a counterterrorism operation in January targeting an al Qaeda compound in the border region between Afghanistan and Pakistan had mistakenly killed two hostages: American Warren Weinstein, who was kidnapped in 2011, and Italian Giovanni Lo Porto, who was abducted in 2012. President Obama apologized for the mistake.

“Based on the intelligence that we had obtained at the time, including hundreds of hours of surveillance, we believed that this was an al Qaeda compound; that no civilians were present,” Obama said. “What we did not know, tragically, is that al Qaeda was hiding the presence of Warren and Giovanni in this same compound.”

For: Evidence surfaces revealing that US airstrikes on Libya’s ISIS killed the two Serbs