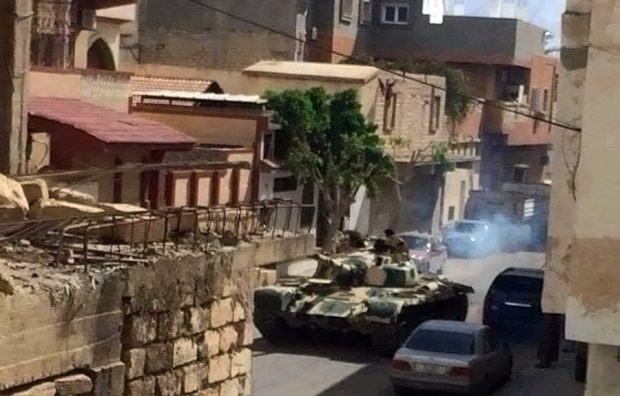 The clashes between Henish and Khadrawi armed groups from Azzawiya city continued on Sunday in Jamal Abdelnaser St., Buildings area, and Al-Rayhana roundabout as well as the park in downtown the city.

“Heavy artillery and tanks plus heavy weapons are being used in the street fight for power in the city center.” Local sources from the city reported.

The Libyan Red Crescent in Azzawiya has been trying to get the families caught up in the middle of the fight out of the clashes zone since Friday.

“We have tried to open a safe passage for the families stuck in the clinic area and Oqba Ben Nafea St., but we could not.” A member from the Red Crescent indicated.

Medical sources in Azzawiya confirmed that 6 people have been killed and more than 20 others were injured during the clashes that started last Friday.

Moreover, sources from the city said tens of houses were destroyed and burnt due to random shelling, adding that also a number of public buildings were hit with some random shells by the two fighting sides.

Eastern and western officials and western region elders have tried to clam things down by urging both sides to spare the lives of the innocent civilians, however, it all went in vain so far.

The Presidential Council also said in a statement on Sunday that it had appointed the Minister of the Interior to open a thorough investigation to know the reason behind the fight and then take the necessary measures to stop it.

For: Fierce clashes continue in Azzawiya in western Tripoli, 6 killed