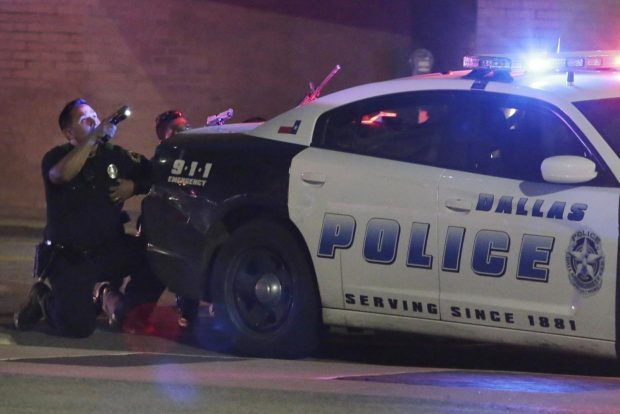 Dallas Police Chief David Brown says a suspect in the sniper shootings that left five officers dead was killed as the result of a bomb detonation.

A total of 12 officers were shot including Dallas Police officers and Dallas Area Rapid Transit officers.

This followed what was a peaceful protest Thursday night, dealing with the deaths of two black men shot by white officers in Minnesota and Louisiana in downtown Dallas.

DART officer Brent Thompson, 43, is among the dead. Two civilians were also injured.

Chief Brown said during a standoff, the suspect told them he was angry about recent police shootings, he was upset at white people, and he wanted to kill white people, especially white officers.

That suspect also said that police would eventually find other IEDs.

He claimed he was not affiliated with any groups and acted alone and police would not speculate on any other potential suspects who have been interviewed.

We’re told at least three other people were detained.

Chief Brown called Dallas Police and DART officers some of the bravest men and women you would ever want to be associated with, pushing civilians out of harms way during the attack and running toward the gunfire.

At 12 p.m. Friday there will be a prayer meeting including interfaith ministers at Thanksgiving Square in Dallas

For: Five US cops killed by a sniper in Dallas “black lives matter” protest