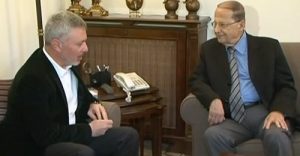 Lebanon’s former prime minister Saad al-Hariri said on Thursday he would back Michel Aoun, a Hezbollah ally, to be president, a move that faces significant opposition but could help resolve a political crisis if it wins support from all the main factions.

Backing Aoun, a foe of his own Future Movement, is a gamble for Hariri, Lebanon’s leading Sunni politician, but one that could ease the deadlock in Beirut and make him prime minister, restoring a political position shaken by financial woe.

“This decision comes from the need to protect Lebanon and the state and the people … but it is a decision that depends on agreement,” he said in a speech, describing Aoun as “the only option left”.

Hariri and Aoun must now attempt to rally enough support to gather a quorum of parliament members, two thirds of the total, for a vote at the next scheduled sitting on October 31.

Aoun’s candidacy is opposed by the parliament speaker Nabih Berri, leader of the Shi’ite Amal movement, which is also an ally of Hezbollah, by some of Hariri’s own supporters, and by others.

Four prominent members of Hariri’s Future Movement bloc in parliament, including former prime minister Fouad Siniora, told reporters they would not vote for Aoun. Telecom Minister Boutros Harb, an ally of Hariri’s from a different party, said the same.

Still, the endorsement by Hariri, who has long opposed Aoun’s Shi’ite ally Hezbollah, but has been politically weakened in recent years, represents an important attempt to break the prolonged standoff between Lebanon’s political leaders.

Lebanon has endured a protracted political crisis since parliament failed to elect a new president more than two years ago, paralyzing government, causing a breakdown in many basic services and raising fears of future unrest.

Aoun said at a televised news conference that the agreement represented an attempt to heal national divisions and “restore political unity”.

Hezbollah, Lebanon’s most powerful political player, released a statement welcoming moves to fill the presidency but without committing to any wider power sharing agreement.