Germany: Some deaths and several injuries in trains crash 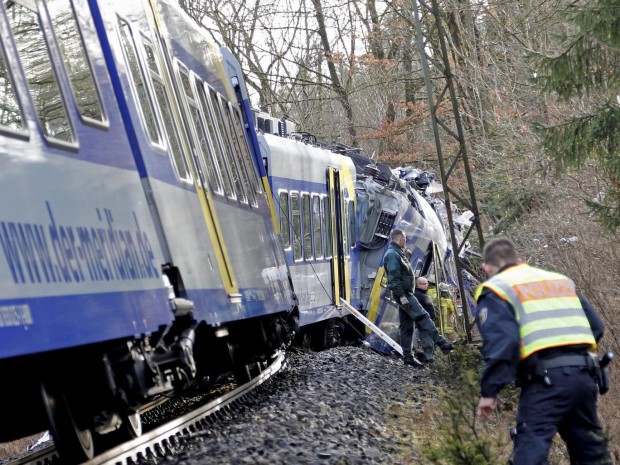 Two trains have crashed into each other in a head-on collision in southern Germany, killing at least nine people and injuring more than 150.

Police said one of the trains had derailed and several carriages overturned, and said the final tally of injuries and fatalities was yet to be confirmed.

The death toll continued to rise on Tuesday afternoon, as officials said the operation to rescue any remaining passengers from the wreckage was complete.

The early morning crash took place near Bad Aibling in Bavaria, and involved two regional trains carrying a large number of commuters – but operators said the “Student” service would have been full of children were it not for the Carnival school holidays.

The latest tally released by Bavarian police said nine people had died and 50 were seriously injured, while around 100 were reported to have more minor injuries.

With so many badly injured in hospital, officers could not rule out the death toll rising further throughout the day.

The crash took place shortly before 7am local time (6am GMT), on a stretch of the track between Rosenheim and Holzkirchen.

Around three hours after the crash, police spokesman Stefan Sonntag updated reporters to say there were still some people trapped.

“This is the biggest accident we have had in years in this region and we have many emergency doctors, ambulances and helicopters on the scene,” he said.

The trains involved would normally be expected to carry children on their way to school, local reports said, but for the German carnival season.

A spokeswoman for police in Upper Bavaria said eight rescue helicopters were standing on a lawn near the entrance to the town of Bad Aibling and further rescue staff were on the way to the scene of the crash. Local journalists said they had “never seen so many ambulances” congregated in one place.

Broadcaster Bayerischer Rundfunk 24 said the local carnival in Rosenheim had been cancelled as a result of the incident.

It said the crash had taken place near a sewage treatment plant amid a spell of cold weather in southern Bavaria.

Images posted to social media showed the crash site appeared to be in a wooded area next to a canal. BR 24 said the nearest main road was frozen at the time of the crash, and that the incident was causing extensive local transport delays.

The operator of the two trains, Bayerische Oberlandbahn, said on its website that the trains both partially derailed and are wedged into each other.

The operator and federal police in Bavaria have activated phone hotlines for families seeking information.

The statement did not address the cause of the crash, and officials declined to comment on it.

For: Germany: Some deaths and several injuries in trains crash