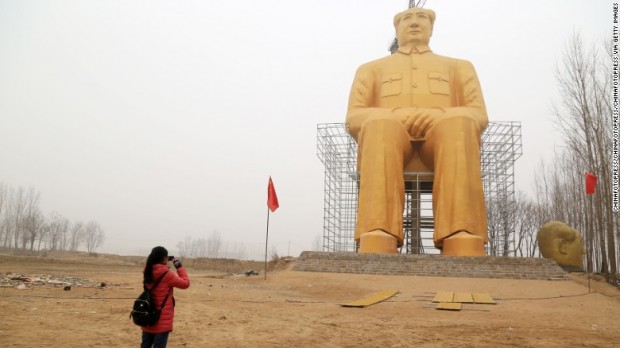 A giant, golden statue of Mao Zedong, the father of modern China, was demolished because it lacked approval from authorities, state media said. 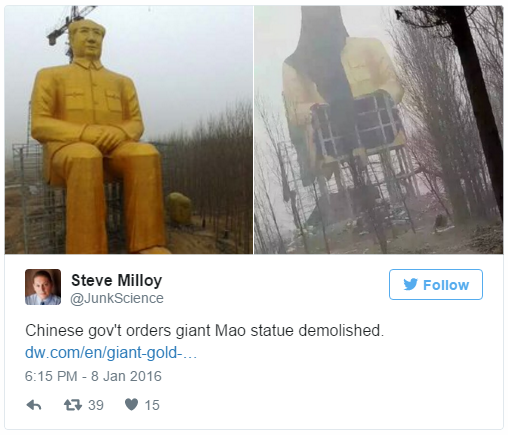 Businessmen and some rural communities chipped in nearly 3 million yuan ($459,000) to build the conspicuous tribute, according to Chinese state media.

It was reportedly constructed of steel and concrete, and painted gold. It was completed in December.

Before its destruction, seated amongst scrubby farmland, the statue had garnered its fair share of compliments — and criticism — on Chinese social media.

User MCULM added: “They can do whatever they want with their own money. It is worth commending if they built a statue of their ancestors. But if the money was from the public pocket, a thorough investigation is needed.”

The location of the statue itself is not without controversy.

According to author Yang Jisheng, Henan province was one of the areas hardest hit by the famines of the 1950s and 60s, which were brought about by Mao’s disastrous “Great Leap Forward” economic and social reforms. Millions died as a result of the policies.

Weibo users also picked up on the sensitive location, with Dapancj asking, “have they all forgotten the great famine to build this?” 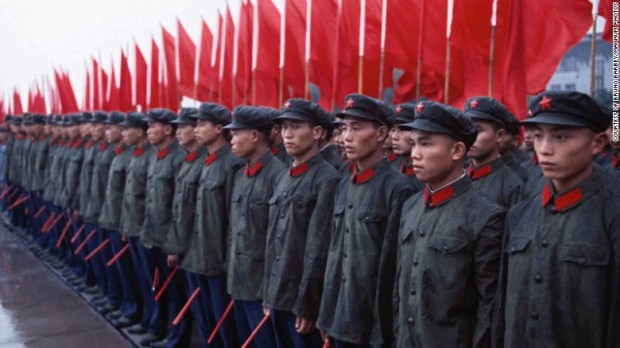 Regardless of the results of his reforms, Mao, who ruled China until his death in 1976, is widely revered and Maoism has even experienced somewhat of a renaissance in some quarters in recent years.

His home village of Shaoshan has seen an uptick in visiting pilgrims and in 2013, current leader Xi Jinping heaped praise on his predecessor during celebrations marking the 120th anniversary of Mao’s birth.

Statues of Mao dot the country, and his portrait looks down on Beijing’s Tiananmen Square.

During anniversary celebrations in 2013 a 200 million yuan ($30.6 million), solid gold likeness wasinstalled in a memorial hall in Shaoshan.

The demolished figure is not the first giant statue of the Great Helmsman.