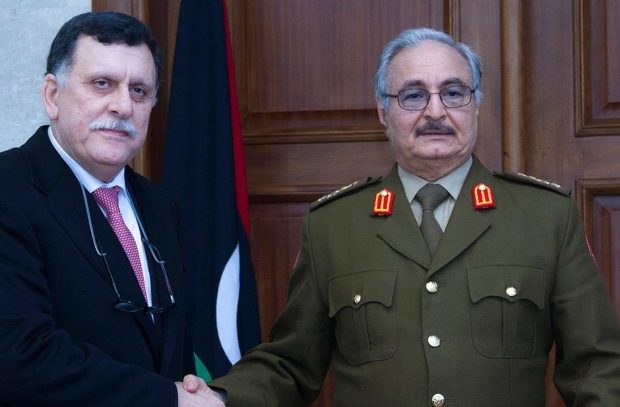 The Head of the Presidential Council of the UN-brokered Government of National Accord, Fayez Al-Serraj, is going to propose an initiative for forming a mini-government as part of a transitional phase, aiming at getting Libya out of its current political impasse, reliable sources reported.

According to the sources, who spoke on condition of anonymity, Al-Serraj will announce his initiative in the few coming days and will propose that the suggested mini-government would have a unified military council headed by the eastern commander of Operation Dignity, Khalifa Haftar, in cooperation with military officers from all across Libya.

The initiative includes proposals of ceasefires on all frontlines in Libya, then all of the factions will be encouraged to engage in parliamentary elections to form a mini-government, opening the door for new transitional phase inclusive of all parties and then leading to speeding up the work of the Constitution Drafting Assembly, the sources explained.

The sources added that Al-Serraj’s initiative has gathered support from Algeria, Turkey, Tunisia and Egypt, saying that they vowed to back it up in the international circles.

They also said that Al-Serraj will propose the initiative for more support from Russia in his upcoming visit to Moscow, where he will try to get Russia to convince Haftar to approve the initiative.

According to the sources, many former regime figures have been engaged in talks with Islamic politicians in Libya, adding that there was probably some talks between the son of Muamar Gaddafi, Saif Al-Islam and Ali Al-Salabi.

The sources explained further by saying that the US Trump administration is so in favour of the Egypt-Turkey-Tunisia-Algeria backed initiative and that was reiterated when an Algerian delegation from the parliament visited the US and proposed the initiative.

Meanwhile, the GNA, as it is now, is facing many obstacles and calls for amendment and including of other political parties and military factions, while the Head of the Presidential Council has been lately visiting many countries, most lately, Turkey and Algeria.

For: GNA Prime Minister to propose mini-government with Haftar as commander of Libya’s army