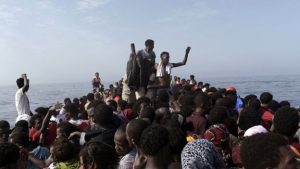 The group said the Italian coastguard had sent a Sea Watch rescue ship and a diverted oil tanker to help a dinghy in distress in international waters, 14 nautical miles off Libya, early on Friday.

As the operation was unfolding, crew of a speedboat labelled “Libyan Coast Guard” attacked the boat packed with about 150 refugees, beating them with sticks and causing at least four to fall into the water and drown, Reuters news agency reported.

“The violent intervention of the Libyan Coast Guard caused a situation of mass panic on board the rubber boat in distress,” Sea Watch said in a statement.

Inside Story – Is Libya the answer to the refugee crisis in Europe?
“One tube of the rubber boat collapsed, causing the majority of the 150 people to slip into the water.”

The men, who spoke only Arabic, beat some of the refugees with clubs, causing panic that caused most of them to fall into the sea, said Neugebauer.

The Italian coastguard confirmed that the vessel SeaWatch2 rescued 120 people before dawn on Friday, but gave no further details.

A spokesman for Libya’s naval forces in Tripoli said he had not heard about about the incident.