Haftar gives specific time for Al-Barghathi to withdraw from GNA 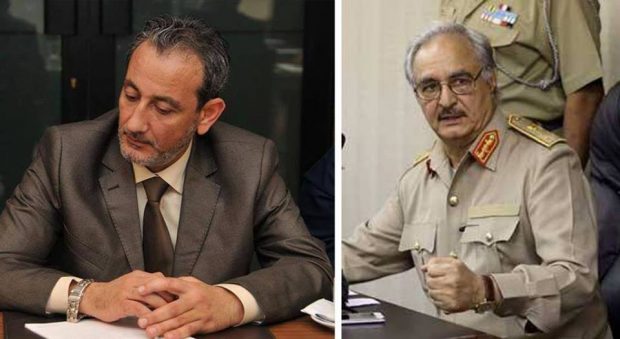 The leader of the so-called Dignity Operation, Khalifa Haftar, has given an ultimatum for the Defense Minister of the Government of National Accord, Al-Mahdi Al-Barghathi to withdraw from the GNA and go back immediately to Benghazi.

An official in the General Command of the Tobruk-based HoR headed by Haftar told a UAE news website Saturday that Hafter gave Al-Barghathi a specific time to announce his withdrawal from GNA and return to Benghazi to lead the fight of Brigade 204 tanks, which used to be under Al-Barghathi’s command.

The official, who preferred to remain anonymous, did not say how long the specific time that Haftar gave to Al-Barghathi will last, saying it is not that long.

He added that the commander of Azzawiya Martyrs Brigade (21) Jamal Al-Zahawi, is the one expected to replace Al-Barghathi as commander of the Brigade 24 tanks, pointing out that Al-Barghathi could face military punishment for violating the military laws.

For: Haftar gives specific time for Al-Barghathi to withdraw from GNA