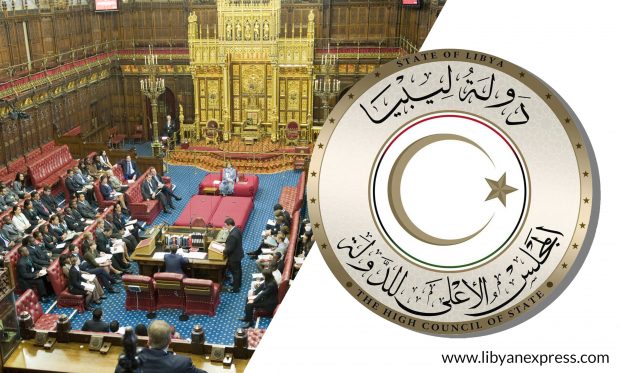 Out of The High Council of State’s concern about the Libyans’ funds inside and outside the country, and in view of the step taken by the British government to have the UK House of Common vote for using Libya’s frozen assets in the UK to compensate the victims of the Irish Republican Army, that Gaddafi regime was accused of taking part in, and aware of the seriousness of this step, The High Council of State declares its resolute rejection of the intent of the House of Common to provide financial compensation from Libya’s frozen assets in the UK for whatever reason.

This issue has been previously addressed by Libya and the UK, and the relations between the two countries resumed naturally without any outstanding disputes, with the presence of different and actual Libyan investments in the UK on this basis.

The High Council of State also resoundingly rejects any measures compromising Libya’s frozen assets, which are frozen by an international resolution under chapter VII, which is a binding to all countries, including the UK. Any measures by the UK will be considered a violation of the international law and the Libyan sovereignty, damages Libya’s economy, and wrongly exploits the circumstances of the country which is going through a difficult transformation phase. The international community is endeavouring to assist Libya to go through this phase not exploit and take advantage of it, and give excuse to use other countries’ assets, discrediting UN Council’s resolutions.

As such, we call upon the Presidential Council to follow up and monitor the developments of this issue, exert all possible efforts, and take all legal measure to protect Libyan’s assets.

The views expressed in Op-Ed pieces are those of the author and do not purport to reflect the opinions or views of Libyan Express.
How to submit an Op-Ed: Libyan Express accepts opinion articles on a wide range of topics. Submissions may be sent to oped@libyanexpress.com. Please include ‘Op-Ed’ in the subject line.
frozen assetsLibyaUK
Share
Submit a Correction
Sign up for our Newsletter.

For: High Council of State voices concern over Britain’s intention to use Libya frozen assets