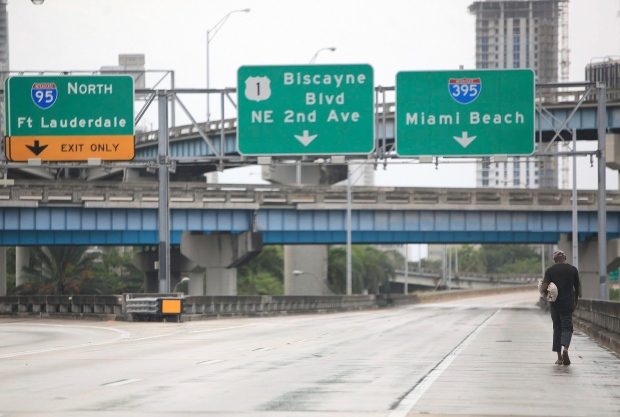 Hurricane Irma took aim at heavily populated areas of central Florida on Monday as it carved a path of destruction through the state with high winds and storm surges that left millions without power, ripped roofs off homes and flooded city streets.

Irma, once ranked as one of the most powerful hurricanes recorded in the Atlantic, came ashore in Florida on Sunday and battered towns as it worked its way up the state.

It weakened to a Category 1 hurricane, carrying maximum sustained winds of about 85 miles per hour (135 km per hour) by 2 a.m. ET (0600 GMT) on Monday, the National Hurricane Center said. The hurricane was churning northwest in the center of the state near the Tampa and Orlando metro areas.

Many areas on both the state’s east and west coasts remained vulnerable to storm surges, when hurricanes push ocean water dangerously over normal levels.

Florida Director of Emergency Management Bryan Koon said officials would wait until first light on Monday to begin rescue efforts and assess damage, adding he did not have yet any numbers on fatalities statewide, the Miami Herald reported.

On Sunday, Irma claimed its first U.S. fatality – a man found dead in a pickup truck that had crashed into a tree in high winds in the town of Marathon, in the Florida Keys, local officials said.

The storm killed at least 28 people as it raged westward through the Caribbean en route to Florida, devastating several small islands, and grazing Puerto Rico, the Dominican Republic and Haiti before pummeling parts of Cuba’s north coast with 36-foot-tall (11-meter) waves.

Irma was ranked a Category 5, the rare top end of the scale of hurricane intensity, for days, and carried maximum sustained winds of up to 185 mph (295 kph) when it crashed into Barbuda island on Wednesday. Its ferocity as it bore down on hurricane-prone Florida prompted one of the largest evacuations in U.S. history.

Some 6.5 million people, about a third of the state’s population, had been ordered to evacuate southern Florida. Residents fled to shelters, hotels or relatives in safer areas.

Many of the evacuation orders extended until at least Monday due in part to flooding, massive power outages and downed electric lines, leaving residents unable to return to their homes to survey any damage.

The views expressed in Op-Ed pieces are those of the author and do not purport to reflect the opinions or views of Libyan Express.
How to submit an Op-Ed: Libyan Express accepts opinion articles on a wide range of topics. Submissions may be sent to oped@libyanexpress.com. Please include ‘Op-Ed’ in the subject line.
FloridaIrmaUS
Share
Submit a Correction
Sign up for our Newsletter.

Political analysts doubt the efficiency of US bill ‘Libya Stabilisation…