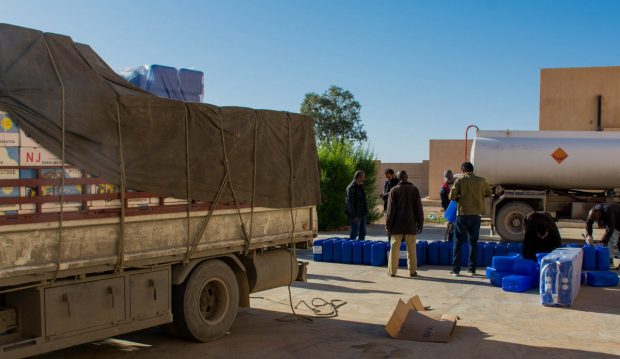 The International Organization for Migration (IOM) in cooperation with Libya’s Ministry of State for Displaced Affairs and the Local Council of Tawergha delivered essential humanitarian assistance to communities in Tawergha, 200 kilometres southeast of Libya’s capital Tripoli, and in the surrounding village of al-Emarat.

After over seven years of insecurity, and subsequent displacement, communities have begun to return to their homes in the surrounding areas. In recent months, and after the return of calm to the area, at least 100 families have permanently returned.

As they begin to rebuild their lives, returnees struggle to access basic services. IOM’s recent humanitarian support reached more than 100 families in Tawergha and 88 in nearby al-Emarat.

In its recent intervention, IOM supplied families with generators, winter blankets, mattresses and hygiene kits, as well as diapers for children.

A combination of awareness raising and psychosocial support (PSS) activities on issues pertaining to the community are being conducted by the IOM’s mental health and psychosocial support team in both locations. Additionally, a distribution that took place on the same day included the delivery of handicrafts and knitting material to the community, and musical instruments that were provided to a local NGO which in turn handed over the items for the good benefit of a school.

“The situation in Tawergha is difficult, my house is damaged with no windows and no doors,” said Salem*, a man in his early 70s. “Yet, I am happy to be back to my homeland and I will never leave it. I am living with my family in a tent, we know that this is a cloud and it shall pass. Tawergha will recover and will become better with time.”

Since the eruption of clashes in and around Tripoli last August, IOM has coordinated humanitarian efforts with partners to reach affected communities, including internally displaced persons (IDPs) in and around the city, which also extended to reach host communities and displaced populations in remote areas such as in al-Fugha in the south of the country, more recently. Over the past few weeks IOM has conducted a needs assessment in the areas around Tawergha to identify, monitor and respond to the needs of returnees relocating in the city.

Prolonged instability in the latter half of 2018 has led to a lack of access to essential public services, and damaged infrastructure, exacerbating the suffering of the people in the area and driving many to seek refuge in camps scattered in areas across the country in search of better living conditions.

“Our support today is only an initial short-term response compared to the work that is yet to be done,” said Matt Huber, IOM Libya’s Deputy Chief of Mission. “We stand committed to working closely with the government to address any unmet needs and reiterate our support to the Libyan community.”

IOM, through its Displacement Tracking Matrix, estimates that around 40,000 Tawerghans remain displaced across Libya whose needs require immediate humanitarian attention. The support provided yesterday is part of IOM Libya’s broader IDP Return and Reintegration nationwide strategy which attends to the needs of IDPs across the country. The Organization continues to follow a needs-based approach in supporting vulnerable people and communities across Libya from initial humanitarian assistance access to durable solutions.

These interventions have been supported by the European Union Emergency Trust Fund for Africa and the Government of Canada.

The views expressed in Op-Ed pieces are those of the author and do not purport to reflect the opinions or views of Libyan Express.
How to submit an Op-Ed: Libyan Express accepts opinion articles on a wide range of topics. Submissions may be sent to oped@libyanexpress.com. Please include ‘Op-Ed’ in the subject line.
IOMLibyaUNUNSMIL
Share
Submit a Correction
Sign up for our Newsletter.

Minister of the Interior and his Turkish counterpart discuss further cooperation…