Iran set US marines free after hours of detention

Ten US sailors who were captured by Revolutionary Guards after entering Iranian waters have been released, soothing tensions during a week in which Iran is expected to receive the first wave of sanctions relief from the landmark nuclear accords.

The US military confirmed the sailors’ release after the Guards issued a statement claiming they were freed into international waters after an apology from Washington.

“We decided to release them after conducting a technical investigation and consultations with our national security officials, and also after establishing that their trespassing into the waters of the Islamic Republic was unintentional and also receiving apology from them,” read the statement published on the Fars news agency, which is affiliated to the Guards.

On Wednesday, the Pentagon said: “Ten US navy sailors safely returned to US custody today, after departing Iran. There are no indications that the sailors were harmed during their brief detention.”

“The sailors departed Farsi Island at 8.43am [GMT], aboard the two Riverine Command boats that they had been operating when they lost contact with the US navy. They were later transferred ashore by US navy aircraft.”

John Kerry, the US secretary of state, said he was pleased that the sailors had been returned. “I also want to thank the Iranian authorities for their cooperation and quick response,” he told an audience at the National Defense University in Washington.

“These are always situations which, as everybody here knows, have the ability, if not properly guided, to get out of control. I’m appreciative for the quick and appropriate response of the Iranian authorities.”

The sailors had been treated properly, an indication of improved diplomatic relations, Kerry said: “I think we can all imagine how a similar situation might have played out three or four years ago. In fact, it is clear that today this kind of issue was able to be peacefully resolved, and officially resolved, and that is a testament to the critical role that diplomacy plays in keeping the country safe, secure and strong.”

The sailors received a medical screening on Wednesday morning aboard the guided missile cruiser USS Anzio, the Pentagon said. They were then expected to be transferred to the aircraft carrier USS Harry S Truman, from where they will be flown ashore at an unspecified point for reintegration.

The Iranian claim of an apology was ambiguous. It was not clear whether Kerry had officially apologised during phone communications with his Iranian counterpart, Mohammad Javad Zarif, or whether the apology, if true, had come from the sailors themselves.

Kerry thanked Iran for the swift resolution of the incident, tweeting:

Peaceful and efficient resolution of this issue is a testament to the critical role diplomacy plays in keeping our country secure & strong.

The US defence secretary, Ash Carter, said: “I am pleased that 10 US navy sailors have departed Iran and are now back in US hands. I want to personally thank secretary of state John Kerry for his diplomatic engagement with Iran to secure our sailors’ swift return. Around the world, the US navy routinely provides assistance to foreign sailors in distress, and we appreciate the timely way in which this situation was resolved.”

A direct conversation between the Iranian foreign minster and US counterpart would have been unthinkable just five years ago, and Carter’s statement is indicative of the improved diplomatic relations between Washington and Tehran.

The Revolutionary Guards’ navy chief and US officials saidmechanical trouble with one of the boats caused them to drift into Iranian territorial waters.

The 10 US detainees – nine men and one woman – were held overnight at an Iranian base on Farsi Island. Tasnim news, affiliated to the Guards, published a series of images showing the sailors in Iranian custody.

Where the boat crews were detained 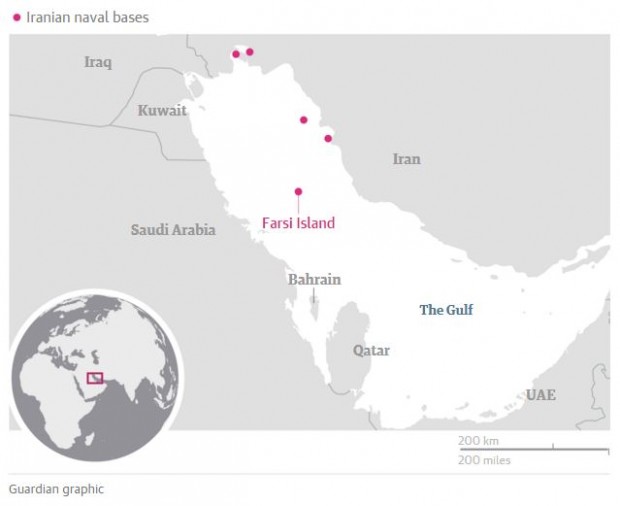 Fars said the two American boats were more than a mile inside Iranian waters when they were detained. The episode came amid heightened regional tensionsand only hours before Barack Obama was scheduled to deliver his final State of the Union address.

The Revolutionary Guards patrol Iranian waters in the Gulf, especially near the strait of Hormuz, a vital passageway through which a fifth of the world’s oil passes in tankers.

Iran’s navy has routine professional exchanges with its US and UK counterparts, but there have been incidents of heightened tension. In 2007, Iran captured 15 Royal Navy sailors and marines during a maritime inspection near Iraq and held them for 13 days in a disputed episode that drew the world’s attention.

In December, the US accused Revolutionary Guards vessels of firing several unguided rockets near US warships, including the USS Harry S Truman, in the strait of Hormuz. The US later released video it said showed the incident.

The swift release of the Americans contradicted speculation that the hardline Revolutionary Guards were seeking to sabotage improving relations between Iran and the west days before the planned implementation of the nuclear deal reached in Vienna in July. It has been established that the US sailors drifted into Iranian territorial waters and that the timing of the incident was irrelevant to the lifting of sanctions.

The handling of the issue signals a new pattern of behaviour by the Guards, which haveused similar circumstances to flex muscles both at home and abroad in the past. Adnan Tabatabai, an Iranian analyst, tweeted:

In an unusual move, the Guards last week condemned the attack by a group of hardliners on the Saudi embassy in Tehran, showing an approach in line with that of the Rouhani administration.

Iran is believed to be only days away from implementation day, when the International Atomic Energy Agency will verify that Tehran has taken all the necessary steps under the nuclear accord for the west to lift economic sanctions. All nuclear-related sanctions, including an embargo on the imports of Iranian oil, will be lifted by the EU. The US will waive them by the order of the president. At least $100bn (£74bn) in frozen assets will also be released to Iran.

Rouhani is pushing efforts to speed up implementation of the deal to bring about tangible relief from sanctions before parliamentary elections in February. Hardliners are worried about how such an event would bolster his profile just before the election period.

Once Iran finishes swapping the core of a heavy water nuclear reactor at Arak with cement, they will receive an influx of cash under the July deal.

However, deep-seated acrimony between Washington and Tehran has hardly ebbed. The US is expected to launch a different series of sanctions in response to Iran’s recent ballistic missile tests, which are outside the scope of the nuclear deal but violate a UN security council prohibition.

For: Iran set US marines free after hours of detention