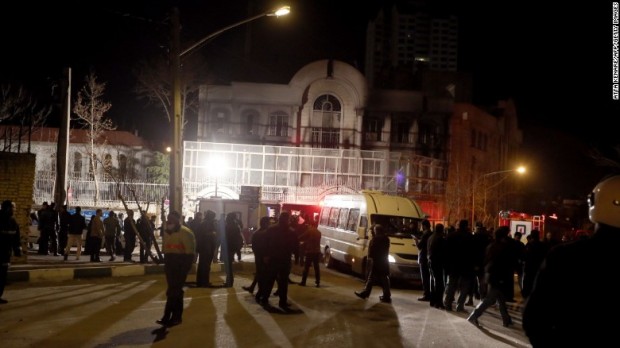 Kuwait has become the latest country to side with Saudi Arabia in its escalating tension with Iran, which stemmed from the execution of a Shiite cleric and led to an attack against the Saudi embassy in Tehran.

On Tuesday, Kuwait recalled its ambassador to Tehran, citing “torching and sabotage activities” of Iranian demonstrators.

“Such action constitutes a flagrant breach of international conventions and violation of Iran’s international commitment over security and safety of diplomatic missions on its lands,” the Kuwaiti foreign ministry said.

The U.N. Security Council has condemned “in the strongest terms” the attacks against the Saudi embassy in Tehran and another Saudi diplomatic mission in Iran after the execution of a Shiite cleric infuriated protesters there.

Demonstrators in Iran descended upon the Saudi embassy in Tehran and set it on fire after Riyadh executed Shiite cleric Nimr al-Nimr.

The Saudis cut diplomatic relations with Iran over the attack, suspending all flights to and from Iran. And several countries lined up alongside the kingdom.

Bahrain too severed diplomatic ties with Iran. The United Arab Emirates recalled its ambassador. And Sudan expelled the Iranian ambassador and the entire Iranian diplomatic mission in the country.

The U.N. Security Council also condemned “in the strongest terms” the attack against the Saudi embassy in Tehran and called on Iran “to protect diplomatic and consular premises against any intrusion or damage.”

Jaberi Ansari, a spokesman for Iran’s foreign ministry, said his country is committed to protecting diplomatic missions and reiterated that no Saudi diplomats were harmed — or even present — during the attack.

The Security Council did not address Nimr’s execution.

U.S. Secretary of State John Kerry reached out to both the Saudi and Iranian foreign ministers to calm tensions.

“We are urging all sides to show some restraint and to not further inflame tensions that are on quite vivid display in the region,” he said Monday in a briefing with reporters.

State Department spokesman John Kirby, meanwhile, urged engagement to reach “a resolution to these things peacefully, diplomatically and without violence.”

China called for “dialogue and negotiations.”

France asked that the powers “do everything in their power to prevent the exacerbation of sectarian and religious tensions.”

“Turkey calls for abandoning the language of threats and a return to the language of diplomacy and asks that caution be used so that the tensions between the two countries does not negatively reflect on the regions security, stability and peacefulness,” the ministry said on its website.

U.N. Secretary-General Ban Ki-moon talked to foreign ministers for both nations Sunday and called the breakdown in relations “deeply worrying.”

Where do we go from here?

It was just weeks ago, after months of prodding, that the United States was able to get foreign ministers from Saudi Arabia and Iran to sit at the same table with the United States and other countries trying to discuss a road map to end the bloody Syrian civil war.

Iran has been a long-time supporter of Syrian President Bashar Al-Assad, while Saudi Arabia has provided the rebel factions fighting Assad with financial assistance and weapons.

It’s nothing new that the two countries aren’t seeing eye to eye.

The schism dates back 14 centuries, and has to do with disputes over who should succeed the Islamic Prophet Mohammed as leader of the Islamic faith.

Sunni Islam has gone on to dominate the faith — nearly 90% of the world’s Muslims are Sunnis.

The Saudis champion the Sunni branch of the faith while Iran backs the Shia side.

The execution of the cleric only exacerbated their differences and will play out in the coming weeks.