A major search is under way in the south of Iraq’s capital, Baghdad, after the kidnapping of several Americans.

Unconfirmed reports say three Americans were abducted on Friday evening along with their Iraqi interpreter, whose home they were visiting at the time.

They have not yet been identified, nor is it clear who is holding them.

The three were said to have been seized by gunmen who were wearing uniforms, leading officials to believe that Shia Muslim militiamen were responsible.

It was the first abduction of Westerners in Iraq for several years.

On Monday, residents of the southern suburb of Dora said security forces had been conducting house-to-house searches, with the area sealed off and helicopters hovering overhead.

It is there that the three Americans are reported to have been abducted by armed men in military uniforms, after visiting the interpreter’s house.

Security sources said the Americans had made previous visits to the area, even though it is regarded as something of a trouble spot, reports the BBC’s Jim Muir in Baghdad. 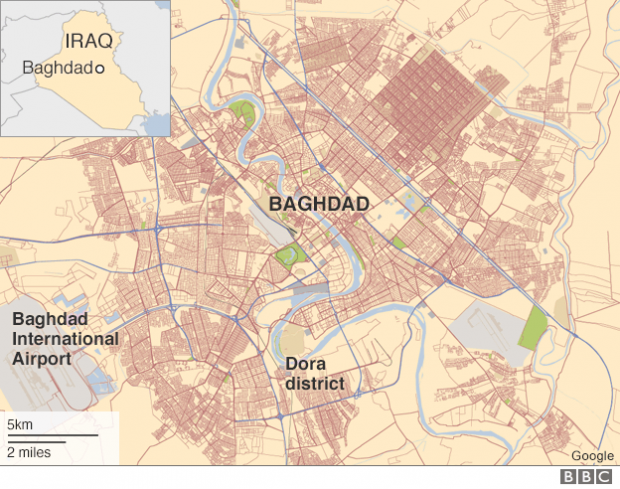 An Iraqi intelligence official told the Associated Press that the men were taken to Sadr City, a predominantly Shia district in north-eastern Baghdad, while a policeman in Dora said they were driven towards the airport, south-east of the capital.

The Americans are believed to be civilians who were working for a construction company operating at the airport.

On Sunday, US state department spokesman John Kirby confirmed it was “aware of reports that American citizens are missing in Iraq”.

“We are working with the full co-operation of the Iraqi authorities to locate and recover the individuals,” he added, without providing details about how many Americans were missing or the circumstances of their disappearance.

If they have indeed been taken by armed Shia factions, our correspondent says, that at least is a less grim scenario than if they had been abducted by militants from the self-styled Islamic State (IS).

The jihadist group said it carried out a deadly attack on a Baghdad shopping centre last week, but its ability to operate in the capital is severely restricted.

Shia gunmen are believed to have been behind the abduction last year of a group of Turkish construction workers, who were later freed, and of a party of hunters from Qatar, a situation which is still under negotiation, our correspondent adds.

The US is leading a multinational coalition that is conducting air strikes on IS in Iraq and Syria, and providing training and advice to Iraqi government forces.

For: Iraq: Search underway for Americans seized in Baghdad