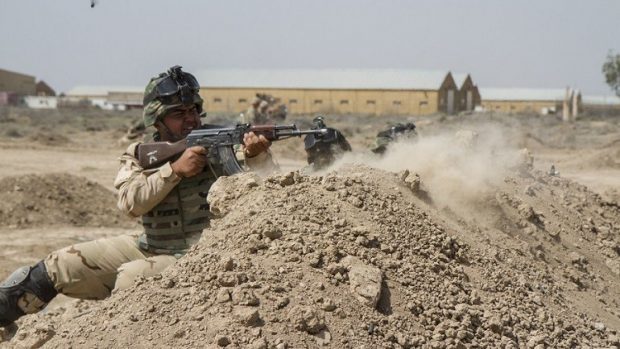 The Iraqi government announced efforts Sunday to retake Fallujah, the first city in the country to fall to the Islamic State group back in 2014.

Fallujah is one of the the group’s major territorial holdings in Iraq. It also has a presence in Syria and Libya, the loyalty of Boko Haram in West Africa, and has perpetuated terrorist attacks in the West. “The moment of real victory has come, and [the Islamic State group] has no option but to flee,” Iraqi Prime Minister Haider al-Abadi told state TV.

The Iraqi military has had the city surrounded for some time, but has greatly amplified its allied numbers in recent days in anticipation of the siege.

The military has said civilian families still in Fallujah would be able to leave the city through safe passages, according to The Wall Street Journal, but did not specify how the process would be arranged.

The Islamic State group’s grip on Fallujah and an Iraqi military blockade there have created harsh living conditions, with many people reportedly starving to death.

“There’s no food, no fuel and no services, so what is left for us to live for?” resident Mohessen Hossam said, according to the Journal, “We want someone to help us – anyone,” Hossam pleaded.

U.S. officials say 2016 has been unkind to the Islamic State group so far. “Over the last six months, our enemy has suffered a string of defeats because the [Iraqi security forces are] proving increasingly effective,” Army Col. Steve Warren said from the U.S. coalition’s headquarters in Baghdad last week.

Fallujah is not new to tragedy, as it famously saw the worst of the fighting in Iraq during the American occupation years of the last decade.