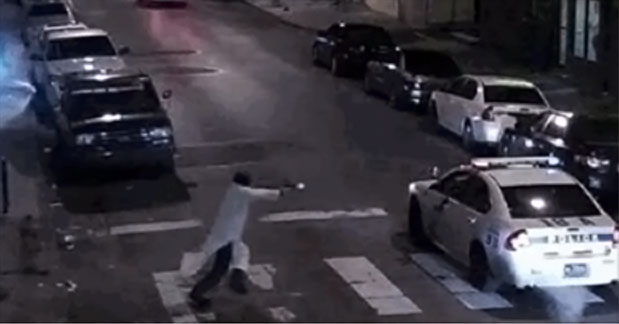 Police said the man accused of ambushing and shooting a Philadelphia patrol officer had pledged allegiance to Isis and that he claimed to have carried out the attack in the name of Allah.

Suspect Edward Archer, who has been arrested, has been accused of firing up to 13 shots from a semi-automatic pistol at point blank range through the window of the officer’s car, Philadelphia Police Commissioner Richard Ross told reporters.

He walked towards the car as he fired, eventually getting close enough to reach in the window, said the police chief.

“He has confessed to committing this cowardly act in the name of Islam,” Mr Ross said at a press conference.

Philadelphia Police Captain James Clark added: “He said he pledges his allegiance to Islamic State, he follows Allah and that was the reason he was called on to do this.”

US officials have been on high security alert following a series of Isis-linked attacks at home and abroad over the last few months.

In November, gunman and suicide bombers affiliated with Islamic State killed 130 people in a series of coordinated attacks in Paris. Last month, a married Muslim couple fatally shot 14 people in San Bernardino, California, in an attack inspired by Isis militants.

Reuters reported that police said there was no evidence as of yet as to whether the shooter had worked with anyone else. The attack happened at around 11.30pm on Thursday in west Philadelphia.

“He was savvy enough to stop just short of implicating himself in a conspiracy,” said Mr Ross.

“He doesn’t appear to be a stupid individual, just an extremely violent one.”

Vocativ said that according to court records, Mr Archer had a litany of felonies and jail time awaiting him. He had previously been charged with making terrorist threats years ago and was due in court later this month, it said.

Police released still images from a surveillance video that shows a gunman, dressed in a white robe, walking toward the patrol car and approaching the driver’s side door. He was firing all that time, police said. Mr Hartnett shouted into his police radio.

“Shots fired…I’m bleeding heavily!” he yelled, as he requested back-up. “I’m bleeding. Get us another unit out here!”

Mr Hartnett, who was able to return fire and hit the suspect in the leg, was taken Penn Presbyterian Hospital and will require several surgeries.

“We’re just lucky, that’s all I can say,” said Mr Ross. “I can’t even believe that he was able to survive this.”

Police said the suspect used a gun that had been stolen from a Philadelphia police officer’s home several years ago, but not by the alleged shooter.