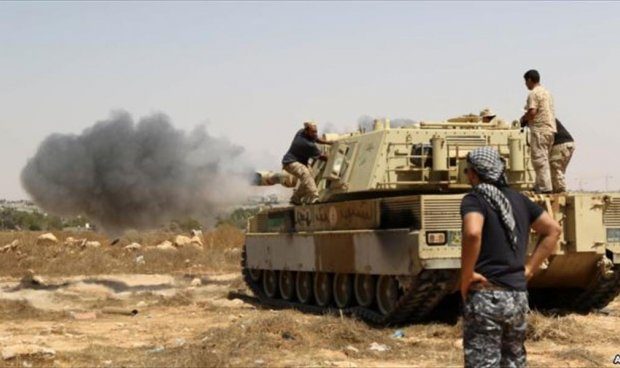 The Head of the Media office of Al-Bunyan Al-Marsous operation, which is formed from different Libyan forces and led by Misurata forces, Muhammad Al-Ghasri, said ISIS has been left with nearly 300 militants, a number of mortars, a tank, and some medium weapons only.

Talking to the Italian news agency, Aki, Al-Ghasri said the battle will take some more time to end as ISIS militants are now trapped inside residential areas and houses , not as when the battle kicked off when but used to be in the open air.

“ISIS militants are now topping the roofs of houses in Neighbourhood 1, 2, Ouagadougou Halls Compound, Ibn Sina Hospital, and Sirte University in a space of 5km, using snipers to thwart the Libyan forces’ advance into their lurking locations.” He told Aki, adding that they don’t know bow many civilians are inside those residential areas, which could prolong the battle a bit as it would be turned into a street battle.

Al-Ghasri added that the Libyan air force has been striking the ISIS militants no less than three times a day after they had been trapped inside houses and residential areas.

He also said that regarding the news about French and US warships mooring in Sirte port, there is no definite answer for it, it is under questioning, I don’t say yes nor do I say no, he added. Yet, those who let the news out of the bag must provide us with details about it, he concluded.

For: ISIS in Sirte reduced to 300 militants only, says Libyan forces, official