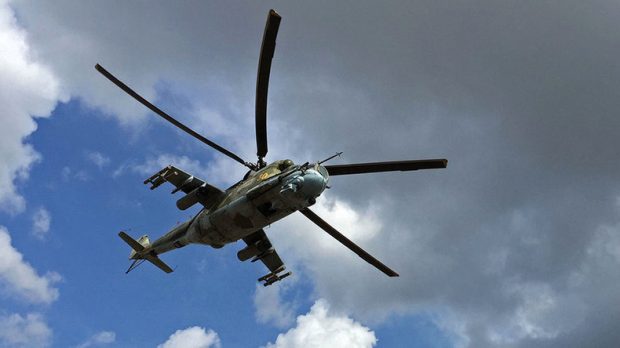 Two Russian airmen died in Syria after their helicopter was shot down by fighters of the Islamic State, Russia’s military said on Saturday.

The episode occurred on Friday east of the ancient city of Palmyra, according to a Defense Ministry statement reported by Tass, the state-run news agency.

The Islamic State claimed responsibility for the attack, according to the SITE Intelligence Group, which monitors jihadist websites.

The two Russians were making a test flight in the Homs region with a Syrian Mi-25 helicopter that was carrying ammunition, the Defense Ministry said. It said Islamic State fighters broke through the lines of the Syrian government forces east of Palmyra at the same time.

The statement said that the Syrians had requested the crew fire on the Islamic State fighters, and that the helicopter had been shot down as it was leaving after the crew exhausted its ammunition.

At least 10 Russian service members have died in Syria, according to accounts by news agencies, since Russia intervened on behalf of the government of President Bashar al-Assad in 2015.

Russian airstrikes have killed hundreds of fighters aligned with the Islamic State and opposition groups as well as hundreds more civilians, according to human rights organizations and other groups monitoring the conflict.

The Syrian government and coalition forces led by the United States have also conducted airstrikes in Syria.

For: ISIS shoots down a Russian helicopter in Palmyra, kills two Russian pilots