The Israeli ringleader in the killing of a Palestinian youth, abducted and burned to death in Jerusalem in 2014, has been convicted of his murder.

A Jerusalem court found 31-year-old Yosef Haim Ben David guilty, rejecting a plea of insanity. He will be sentenced next month.

He was killed in apparent revenge for the murders of three Israeli teens in the occupied West Bank.

Mohammad Abu Khdair’s body was found in a forest in West Jerusalem on 2 July 2014, two days after the bodies of the Israelis abducted and murdered by Hamas militants that June were found.

The killings were part of an escalating cycle of violence, culminating in a war between Israel and militants in Gaza.

Ben David’s lawyer had submitted a psychiatric opinion which stated his client had not been responsible for his actions at the time of the murder.

His accomplices, who were aged 17 and 16 at the time of the high-profile killing, were jailed for life and 21 years respectively.

The three had abducted Mohammad Abu Khdair at random as he stood on a road in the Shufat district of East Jerusalem.

The two youths then beat the Palestinian unconscious in the back of a car being driven by Ben David.

One of the minors helped douse Mohammad Abu Khdair with petrol while he was still alive, before Ben David lit a match and set him on fire. 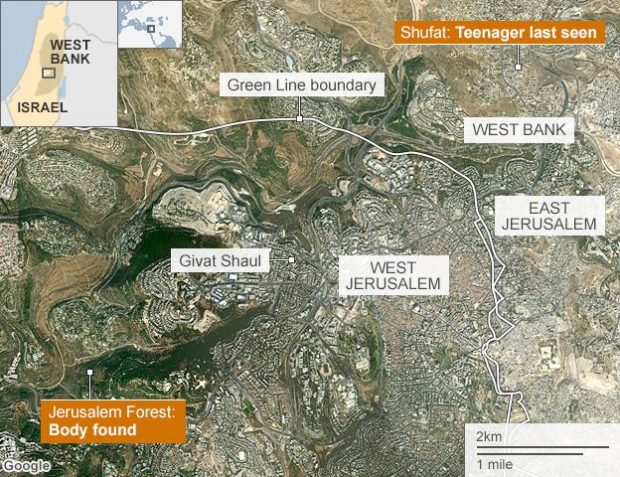 During the attack, Ben David called out the names of Israelis murdered by Palestinians, including the three Israeli teenagers – Naftali Fraenkel and Gilad Shaar, both aged 16, and 19-year-old Eyal Yifrach – abducted and killed in the West Bank weeks earlier, the Jerusalem Post newspaper reported.

Two Palestinians suspected of their murders were killed by Israeli forces in a gun-battle at their hideout in Hebron in September 2014.

A third man, Hussam Qawasmeh, was sentenced to three life terms in prison in connection with their murders.

For: Israeli ringleader found guilty in murdering and burning case of Abu Khdair