Israeli will never ever return Golan to Syrians, says Natanyahu 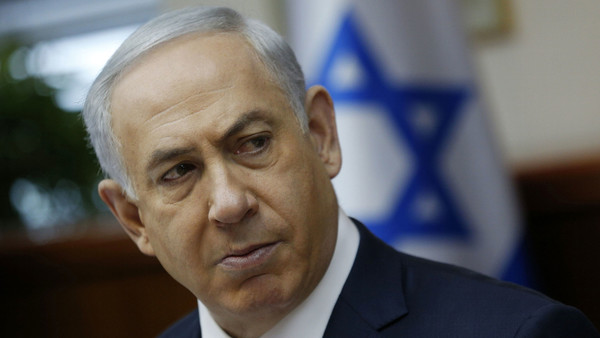 Benjamin Netanyahu, Israel’s prime minister, said on Sunday the Golan Heights would “never” be returned to Syria, as he held a cabinet meeting in the occupied territory that coincided with a Syrian national holiday.

Israel has been alarmed by a draft peace deal in UN-led talks in Geneva that includes a clause calling for it to return the Golan Heights to Syria. Mr Netanyahu said he had told John Kerry, US secretary of state, that Israel would not oppose a peace agreement, but would demand “it doesn’t come at the cost of Israel’s security”.

Mr Netanyahu claimed the Golan Heights had been “an integral part of the Land of Israel” since ancient times — in words that echo language successive Israeli governments have used to justify illegal settlement building in the occupied Palestinian West Bank and East Jerusalem.

He said “thousands of families” would in the coming years join the roughly 50,000 people who already live there. “In the stormy region around us, Israel is the stabilising factor. Israel is the solution not the problem,” Mr Netanyahu declared.

Israel seized the Golan Heights in the 1967 Six Day War and annexed it in 1981, but the international community does not recognise it as part of its territory.

Numerous UN resolutions have called on Israel to withdraw. In 2010, Israel held secret talks with Syria under which it would have pulled back to its 1967 border in exchange for a peace deal. However, its position has hardened since the Arab Spring revolts and the war against President Bashar al-Assad that began in 2011, and the subsequent rise of the Islamic State group.

In a separate visit to the Golan Heights on April 11, Mr Netanyahu admitted for the first time that Israel’s military had struck “dozens of times” inside Syria to prevent the shipment of weapons to Hizbollah. Israel is officially neutral in the Syria war, but has carried out strikes to police what it sees as “red lines” — including weapons transfers and any move by Iran or Hizbollah to militarise the Golan Heights.

Separately, Iran on Sunday showcased the first components of a Russian-made S-300 surface-to-air missile system during an Army Day parade. Israel had sought to block delivery of the advanced weapon, delivery of the first part of which came after years of on-and-off negotiations.

Iranian media on Sunday carried photos of trucks carrying parts of the system. Iran’s Fars news agency, which is close the Revolutionary Guards, said the parts included radar and command posts for the S-300, but not the missile itself.

Hassan Rouhani, Iran’s president, said those who did not think Iran had power were “fools”. “Iran will respond to threats with threats and will cut off the hands of any invaders,” he said.

Naftali Bennett, Israel’s extreme rightwing education minister, said last year that “Isis would be swimming in the Sea of Galilee” were the country to give up the part of the Golan Heights it occupies.

Russia’s entry to the Syrian war last year on the side of Mr Assad’s government stoked fears in Israel that Iran and the militant group Hizbollah might use the Golan Heights as a front from which to stage attacks.

Mr Netanyahu is due to travel to Moscow on Thursday to meet President Vladimir Putin and discuss the Golan Heights, among other issues. Russia and Israel have a mechanism to avoid clashes between their militaries in the border region.

For: Israeli will never ever return Golan to Syrians, says Natanyahu