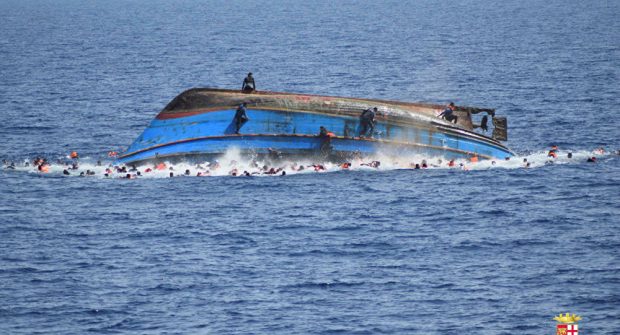 The EU Mediterranean rescue mission says that it has located about 20 bodies in the seas off Libya’s coast after a migrant boat sank.

Navy Lt Rino Gentile of the EU NAVFOR operation said that the sinking dinghy was first spotted by one of its aircraft. Both the Italian coast guard and the Spanish frigate Regina Sofia intervened. He said some 20 bodies were located in the sea.

Earlier, an Italian coastguard spokesman said 88 people have been rescued.

It was the second shipwreck in two days, after five were confirmed to have died when a large fishing boat flipped over in the sea on Wednesday.

Boat arrivals in Italy have risen sharply this week amid warm weather and calm seas, and about 20 rescue operations are currently under way, the spokesman said.

The coastguard has coordinated the rescue of around 900 migrants in seven different operations on Thursday. That brings the total of migrants who have been rescued since Monday to more than 7,000.

Through Tuesday, total sea arrivals in Italy had fallen by 9 percent this year, to 37,743, according to the Interior Ministry, but the country’s migrant shelters are already under pressure to house 115,507 migrants, about twice as many as two years ago.

Some 650 migrants are scheduled to arrive in the Sicilian city of Porto Empedocle later on Thursday, including the five dead bodies recovered by the Italian navy on Wednesday.