Italy and Britain prepare to “occupy” Libya, once again 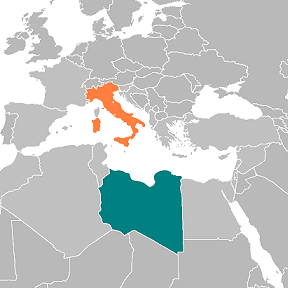 As time passes over the foreign policy of Western nations, the façade of promoting “freedom” and “democracy” passes with it. Even with well-established propaganda mechanisms in place to convince the Western public that NATO involvement in the Middle East and North Africa (MENA) serves a noble purpose, there are breaks in the wall of nonsense that passes for official explanations and mainstream media reporting that document the NATO march of terror across the world that is currently underway.

In this case, the lie is that a direct Western presence in Libya is anything other than a return to open colonialism by the very powers who perpetrated it in years past on the very same territory.

The latest crack in the façade (for those paying attention), is the deployment of a joint British-Italian force consisting of 6,000 soldiers to Libya under the guise of defeating ISIS.

It is estimated that there are around 4,000 ISIS fighters present in Libya at the moment and that these fighters pose a significant threat to the national security of European nations as well as a number of oil fields located in Libya.

As Colin Freeman writes for the Telegraph,

Pressure for British troops to be deployed against Islamic State militants in Libya grew on Monday after the terror group attempted to seize the country’s largest oil depot.

At least two people were killed when Isil fighters launched a combined gun and suicide car bomb attack on the Sidra oil port on Libya’s Mediterranean coast. A rocket fired into a 420,000 barrel oil tank also sparked a huge blaze.

Sidra lies around 130 miles east along the coast from the late Colonel Gaddafi’s home city of Sirte, where Isil first raised its black jihadist flag a year ago.

The prospect of Isil also grabbing lucrative oil facilities will increase pressure on Britain to press ahead with a plan to send troops to help Libya’s fledgling government push Isil out.

Libya was “offered help” by Britain provided that the two separate Libyan governments – the more secular House of Representatives and the Islamist General National Congress – form a unity government, whichboth parties did shortly before Christmas.

It is noteworthy that the British press reported the decision to form a unified government in terms of the deployment of British troops as opposed to the domestic political repercussions in Libya itself.

With the formation of the unity government, British troops, along with Italian ones (notably Libya’s previous colonial controller), are apparently on their way, although the plan appears that it will take a few months to be put in place.

As Freeman reports, “Under the plan, up to 1,000 British troops would form part of a 6,000-strong joint force with Italy – Libya’s former colonial power – in training and advising Libyan forces. British special forces could also be engaged on the front line.”

Regarding the ISIS attack on the Libyan oil facility, Freeman writes that “While Sidra’s oil depot has been out of action for much of the past year because of Libya’s ongoing civil war, capturing it would still have been a major prize for Isil, which has earned millions of dollars from its control of oil facilities in Syria.”

Of course, with the deployment of Italian and British troops to the country, it is both Italy and the UK who are set to hold the oil ports near the Mediterranean coasts with the new Libyan coalition government serving as a mere cover for NATO control, a convenient “coincidence” for the European powers who would love to have control of yet another source of oil, particularly of the Libyan variety.

Clearly, the deployment of British and Italian troops to Libya is nothing more than another geopolitical move designed to gain access to oil and gain strategic footing in North Africa and the Middle East.

The true enemy, from the perspective of NATO is not ISIS. Hence, the deployment of such a small number of troops (6,000 vs 4,000).

The true enemy is national independence and the strategic positioning of Russia, the nation that holds much of Europe by the scruff of the neck when it comes to oil.

Regardless of the manner in which the deployment is being presenting by the Western mainstream press, the truth is that the re-re-invasion of Libya is nothing more than colonialism version 3.0.

For: Italy and Britain prepare to “occupy” Libya, once again