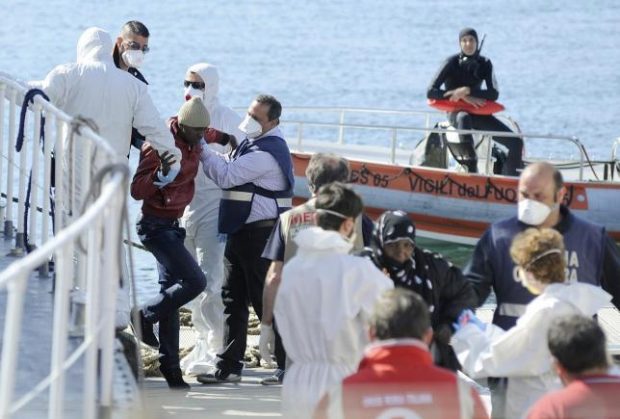 France, Italy and Spain urged their European partners on Monday to move the EU’s Mediterranean naval mission into Libyan waters, if requested by a new government in Tripoli, to stop a new tide of migrants and uphold a U.N. arms embargo.

An expanded naval mission is one part of the EU’s emerging support plan for Libya, which EU foreign and defence ministers will discuss over dinner in Luxembourg, and could see Europe return to the country with 100 million euros in aid.

“It is indispensable to ensure Libya’s stability, the security of Libyans and also its borders,” said French Foreign Minister Jean-Marc Ayrault, after a weekend visit to Tripoli.

“We must do all we can to fight against the human smugglers and arms trafficking,” he told reporters, referring to the United Nations arms embargo on Libya, in place since 2011.

More than 50 ministers will discuss the plans that also include sending security personnel to train Libyan police and border guards and that could mark Europe’s most significant intervention in North Africa in decades.

Europe is eager to support the new unity leaders to tackle Islamic State militants and stop migrants, though the new government is still trying to establish itself in Tripoli and is wary of being seen as a foreign-imposed body with no legitimacy.

Europe’s failed efforts to help its neighbours since 2003 has created what some officials have described as “a ring of fire” on the EU’s borders, with refugees teeming towards the European Union.

Reports of another mass drowning of migrants over the weekend in the Mediterranean, off Egypt’s coast, demonstrated that people smugglers were still operating freely and flows could increase as the weather improves.

Italian Foreign Minister Paolo Gentiloni circulated a list of ideas to ministers, which set out how the EU naval mission should start “new phases and tasks, including the training of the Libyan coastguard.”

The EU’s “Sophia” mission is operating in international waters near Libya and has saved some 8,000 lives since it started in mid-2015, but it is too far out to destroy boats used by people smugglers, catch traffickers or head off an expected surge in migrants trying to reach Europe by sea from Libya.

EU governments want a request from the new United Nations-backed Libyan government in Tripoli to operate in Libyan waters and some, such as Sweden, say that might also require a U.N. Security Council resolution if the mission is to try to stop arms smuggling.

Security Council member Russia said it was unlikely to back such a request any time soon.

Moscow believes the West went too far when a NATO-backed mission helped bring down Libya’s long-time leader Muammar Gaddafi in 2011. Russia says it overstepped a U.N. mandate that was only to impose a no-fly zone and protect civilians.

While a broader EU naval mission may be difficult to agree, EU governments hope to prepare a bigger role for EU training personnel, potentially in cooperation with NATO, to build up Libya’s shattered security forces.

Talks on a possible EU training mission could give momentum to discussions among Italian, French, British and U.S. military planners on whether to send troops to Libya to help to protect key installations, government buildings, ports and the airport.