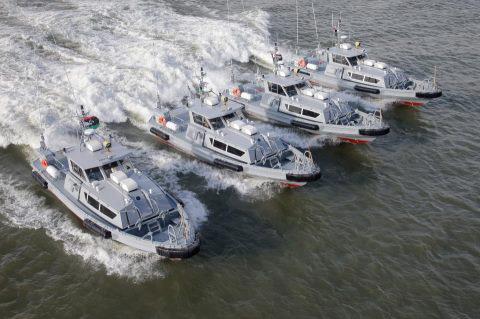 The Italian Interior Minister, Marco Minniti, handed over Monday four patrol boats repaired in Italy as part of cooperation in the fight against illegal immigration with the Libyan coastguard.

The crews were trained in Italy “to monitor Libyan territorial waters…and contribute, together with Italy and Europe, to security in the Mediterranean”, Minniti said in remarks translated into Arabic, according to Associated Press.

A Libyan naval officer told AFP the vessels had been due for delivery in 2014, but this date was pushed back because of violence and instability in the country.

Minniti said on Monday another six patrol boats would be handed over to Libya soon after the training of the crews, according to the Ssociated Press.

Italy registered nearly 42,500 migrant arrivals by sea by mid-April, 97 percent of them from Libya, Minniti said in a joint letter written with his German counterpart to the European Commission, reported The Local It.

The Head of the Presidential Council of the UN-backed Government of National Accord (GNA), Fayez Al-Serraj, met Monday with the Italian Interior Minister, Marco Minniti, in Tripoli.

The two officials discussed the mutual relations and security cooperation between Libya and Italy as well as the development of Libyan security personnel’ work and equipment, especially for those who are tasked with securing the borders agsisnt illegal immigration.

The Italian Interior Minister and Al-Serraj both talked about the need to cooperate in raising the qualifications of the Libyan coastguards and in giving Libya the state-of-the-art equipment to secure the maritime borders.

Libya and Italy have been cooperating on the issues of fighting illegal immigrants’ flows into Italy via the Libyan shores for a long time since after 2011.

Italy is currently involved with the EU operations off Libyan coasts in training Libyan coastguards and rescuing migrants in the Mediterranean.

For: Italy hands over four patrol boats to Libyan Navy